UN News/Shirin Yaseen
Protests against police brutality took place across the United States in 2020, including in New York City.

Expressing alarm over “rampant police brutality against peaceful protesters worldwide”, more than 40 UN-appointed human rights experts on Friday called for an end to the violence, urging Governments to promote dialogue, tolerance and diversity.

“In recent months and years, we have repeatedly voiced our concern over a steady increase in the use of excessive force, police brutality, and other forms of cruel, inhuman or degrading treatment, as well as arbitrary detention, against predominantly peaceful protesters in all regions of the world,” they said in a statement.

UN experts express alarm at rampant #PoliceBrutality against peaceful protesters worldwide and warn States of grave danger arising from such abuse for human rights and rule of law. They call for an end to police brutality worldwide.Read 👉 https://t.co/VUZrqYcb1p pic.twitter.com/mKsfJ6DpVF

Most of these incidents were rooted in political, socio-economic, ethnic, racial, religious, or other tensions, specific to particular national or regional situations, the experts said.

“At the same time, there are also relevant, more generic contexts of global reach and underlying reasons of racism, gender-based and other forms of discrimination in law enforcement,” they added.

Furthermore, since the start of the COVID-19 pandemic, there have been numerous reports of security forces using excessive violence to enforce emergency public health measures such as bans on mass gatherings, as well as lockdowns and curfews. This has resulted in unlawful deaths, injury, psychological trauma and arbitrary detentions.

“Most worryingly, throughout all regions and contexts, these acts of violence and abuse have often been encouraged by divisive, discriminatory and inflammatory narratives spread or condoned by political leaders, local authorities, and parts of the media, and by the resulting atmosphere of near complete impunity for perpetrators.”

The experts underlined the prime responsibility governments and political leaders have in preventing these dangerous developments through non-violent means, such as pro-active communication to encourage de-escalation, reconciliation, and the peaceful exercise of civil and political rights.

“Public confidence in the reliability, legitimacy and integrity of State institutions and their law enforcement officials is the most valuable commodity of any peaceful, just and sustainable society and the very foundation of democracy and the rule of law,” they said.

“We therefore urge governments and political leaders not to needlessly squander the trust of their people, to refrain from any unwarranted violence, coercion and divisiveness, and to prioritize and promote dialogue, tolerance and diversity in the common public interest of all.”

The statement was issued by three UN Special Rapporteurs, and endorsed by 40 other independent experts, who monitor specific human rights concerns globally such as torture, summary executions and challenges to the right to peaceful assembly.

They all report to the UN Human Rights Council, which issued their mandates, and operate in their individual capacity, meaning they are not UN staff and are not paid for their work. 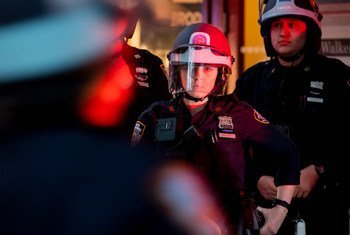 Radical policing reforms are needed to address systemic racism affecting people of African descent around the world, UN rights chief Michelle Bachelet said on Monday, as her Office published a series of recommendations prompted by the killing of George Floyd.