UN Photo/Tobin Jones
Women and children at a market stand in Kurtunwaarey , Somalia.

James Swan, UN Special Representative and Head of the UN’s Assistance Mission in Somalia (UNSOM), outlined progress made since the signing of the Electoral Implementation Agreement, on 27 May.

He also spotlighted outstanding challenges requiring the global community’s urgent support, including a dire humanitarian situation compounded by droughts, floods and the COVID-19 pandemic, and the increasingly severe threat posed by the terrorist group Al-Shabaab.

Following a prolonged period of uncertainty and heightened tensions, the long-awaited elections in Somalia are now moving forward, albeit somewhat behind schedule", Mr. Swan told ambassadors.

Noting that Prime Minister Roble demonstrated strong leadership and initiative in moving the process forward, he said the National Consultative Council has held regular meetings on key issues related to the implementation of the electoral Agreement.

Election management bodies at the Federal and state levels have also been established, and the National Electoral Security Committee has begun its work.

Meanwhile, an Advocacy Committee – whose chairperson also briefed the Council on Thursday – was also appointed, in large part to ensure that the agreed 30 per cent quota for women’s representation in the upcoming federal election, is met.

The progress outlined on Thursday comes on the heels of a political crisis earlier this year, which threatened Somalia’s exceedingly fragile State-building progress and was narrowly averted.

Talks between the Federal Government and the heads of federal member states broke down in April, and the House of the People of the Somali Parliament adopted a “Special Law” abandoning the previous electoral agreement, reached in September 2020.

Among other things, the law sought to extend the mandates of current officeholders for up to two more years.

However, opposition to those changes led to violent clashes in late April, with the House of the People reversing its Special Law on 1 May and leaders coming together to de-escalate tensions.

While praising the strides made, Mr. Swan spotlighted the need for additional progress in several priority areas, including more intensive and detailed preparations for electoral security and clarity on plans to secure the 30 per cent quota for women.

The UN is working with the office of the Prime Minister and the election management committees to implement the 27 May Agreement and election preparations, including through technical and logistical support and the coordination of international financial resources.

Recently, an agreement was signed with the Prime Minister’s office to ensure that donor funds contributed by UN Member States will be made available for use by Somalia’s electoral management bodies.

Mr. Swan stressed that all that work must continue in order to effectively tackle Somalia’s dire humanitarian situation, which is increasingly exacerbated by climate change impacts – especially drought and flood cycles – and the relentless threat of Al-Shabaab terrorist attacks. 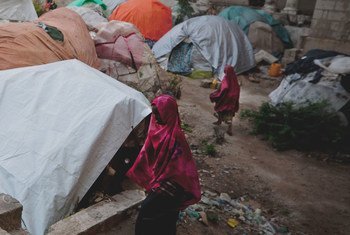 An “alarming” 80 per cent increase in sexual violence in Somalia, as documented in two recent reports by the Secretary-General, has been described as “appalling” by two UN Special Representatives.