Six months after seizing power in a coup, Myanmar’s military leaders now appear to be moving to consolidate their rule, the UN Special Envoy for the country said on Tuesday, in her latest briefing to journalists in New York.

Christine Schraner Burgener said the situation in Myanmar “is still very worrisome”, amid a “severe” third wave of COVID-19 infections.

“In my view, the Commander-in-Chief appears determined to solidify his grip on power with the latest caretaker government announcement; also, with the formal annulment of the election result from last year and declaration of the Commander-in-Chief to be Prime Minister of the country,” the UN envoy said, speaking from Switzerland.

“This is an attempt to promote legitimacy against lack of international action taken”, she said. “And I have to make (it) clear that the UN does not recognize Governments, so it’s up to the Member States.”

She underlined that “as long as Member States do not make any decision”, Myanmar’s Permanent Representative in New York, Kyaw Moe Tun, remains the country’s legitimate UN Ambassador, while Ms. Suu Kyi and President Myint are its leaders.

Recently, international media reported that a plot was uncovered to kill or injure Ambassador Tun, who denounced the coup in the General Assembly Hall in New York.

“I was really shocked to hear this, and clearly it’s now up to the investigation team to find out who is behind this attack,” said Ms.Schraner Burgener.

The situation on the ground in Myanmar remains “very difficult”, she reported.

“There is no freedom of speech, and I have still grave concerns about attacks against the free press. And I urge always in my discussions with the army to release political prisoners, including many media workers.”

The military cracked down on pro-democracy demonstrations in the wake of the coup, and more than 960 people have been killed so far.  Thousands more were arrested and detained, including foreigners and over 100 children.

Meanwhile, clashes between the army and local defense forces continue. Violence has risen, and the defense groups are increasingly using “professional weapons”.

At the same time, Myanmar is also facing a devastating battle against the coronavirus.  More than 331,000 cases have been reported.

UN agencies and partners are working to resume provision of health assistance, with priority given to vaccine rollout through the global solidarity initiative, COVAX, and to revitalizing immunizations generally.

Ms. Schraner Burgener continues her engagement to find a peaceful solution to the political crisis in Myanmar, although she has yet to be allowed to travel there.

The UN Special Envoy has been holding talks with the military, ethnic armed organizations, and other stakeholders, who include the National Unity Government (NUG), formed by exiled lawmakers ousted in the coup.  Representatives come from the NLD, other parties and ethnic armed groups.

Over the past two months, she has been promoting the idea of an inclusive dialogue organized around four “clusters” covering pandemic response, humanitarian assistance, and issues related to the Rohingya community.

The final and biggest cluster would address root causes of the crisis, such as discussions around the federal system, the constitution, law reforms and the electoral system.

She has also proposed establishing an international observer group on Myanmar. Membership would comprise China, India, Japan, Thailand, the United States, the United Kingdom, Norway, and Switzerland, in addition to the UN, the European Union and the Southeast Asian regional bloc, ASEAN.

“The ethnic armed groups were in the majority very positive of this idea, and really want to find a peaceful solution,” she said, referring to the dialogue proposal.

“The NUG…was interested in the idea but clearly would have pre-conditions to start such a dialogue.”

Although receptive to some of her ideas, including integrating health workers in COVID-19 prevention measures, “on the dialogue, I didn’t receive an answer: not a positive, not a negative.”

She hoped that with the recent appointment of an ASEAN Special Envoy on Myanmar, an all-inclusive dialogue will take place, otherwise “it goes more and more in the direction of a civil war,” she warned. 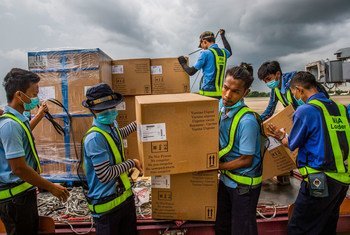 The World Food Programme (WFP) warned on Friday that it is facing a 70 per cent funding shortfall in Myanmar, where millions face growing food insecurity.