© UNICEF/Fouad Choufany
The psychological impacts of the Beirut explosions continue to be felt deeply by children and caregivers, long after flesh wounds have healed.

A year after the devastating explosions in Lebanon’s capital, Beirut, a staggering 98 per cent of families are still in need, according to a survey published on Tuesday by the UN Children’s Fund, UNICEF.

The rapid assessment highlights the severity of the trauma children suffered, and the dire needs families have experienced, which have been magnified by a collapsing economy, political instability and the COVID-19 pandemic.

One year on from the #BeirutBlast, 98 per cent of families affected are still in need.@UNICEFLebanon is calling for urgent action.https://t.co/qT6iWeiMH0

It was conducted in July and based on telephone interviews with 1,187 households.

“One year after the tragic events, children's lives remain deeply affected. That is what their parents tell us,” said Yukie Mokuo, UNICEF Representative in Lebanon.

“Those families have been struggling to recover from the aftermath of the explosions at the worst possible time – in the middle of a devastating economic crisis and a major pandemic.”

The blasts on 4 August 2020 destroyed large swathes of Beirut.  More than 200 people died, six of whom were children, while more than 6.500 people, including 1,000 children, were injured.

One-third of families with children younger than 18 reported that at least one child in their household was still showing signs of psychological distress.  For adults, it was closer to half.

The survey further revealed that almost all families said their homes needed repairs after the explosions, which remains the case for half of them a year later.

Four in 10 households said their water supply system was affected, and about a quarter said the situation is still the same today.

“Since the blast, Lebanon has been in free fall struggling with a triple crisis: economic, political and the COVID-19 pandemic. This is threatening to leave almost every child in Lebanon vulnerable and in need," said Ted Chaiban, UNICEF regional director in the Middle East and North Africa.

"If change, recovery and accountability don’t happen now they might not happen at all, taking the country further into the abyss and a place of no return.”

Ahead of the anniversary, UNICEF is calling for action, beginning with making children in Lebanon a top priority, and ensuring their basic rights are respected.

Lebanese leaders are also urged to overcome their political differences and unite to form a government centred on putting the country on the path to recovery.  Authorities are further encouraged to provide justice for the families affected by the blast, and hold those responsible accountable.

“Sustaining the delivery of public services for the short and longer term is key for child survival and development. This includes the provision of water, education, and healthcare for all directly benefitting children and the communities in general,” UNICEF said in a press release.

However, this can only happen through good governance and public systems that are resilient to even the worst of shocks and crises, the agency added.

“If those systems were in place, we would not have been where we are with the water crisis, as an example, where 75 per cent of the households in the country are at risk of losing access to water. “

Lebanon should also build a sustainable national social assistance system, including to provide cash assistance to families in need, similar to a UNICEF-supported programme known as ‘Haddi” that currently is in place.

Finally, the UN agency called for a transparent and credible investigation to determine the cause of the explosion, hold those responsible accountable, and bring justice to affected families, including those who lost loved ones in the tragedy.

The UN High Commissioner for Human Rights, Michelle Bachelet, has also called for accountability for the deepening crisis in Lebanon since the explosions.

Ms. Bachelet has stressed the urgent need for the Government to ensure a transparent, effective, thorough and impartial investigation into the incident, her Spokesperson, Marta Hurtado, told journalists in Geneva on Tuesday.

“There was initially a powerful spirit of national solidarity as all elements of society came together in response, and the Government initiated judicial proceedings. But 12 months on, victims and their loved ones are still fighting for justice and truth. Investigations appear to have stalled, amid a worrying lack of transparency and accountability,” she said.

Ms. Hurtado added that the High Commissioner also urged the authorities to uphold the right of victims to effective remedy and reparations.

“One victim, who lost her husband, her brother and a cousin in the blast, said she would keep seeking the truth to her last breath.  The authorities must pursue the investigations with similar resolve.”

Meanwhile, a top official from the UN’s Educational, Scientific and Cultural Organization (UNESCO) will be in Beirut this week to mark the solemn anniversary.

The explosions affected at least 85,000 students and damaged some 226 schools, 20 training centres and 32 university campuses.

Ms. Giannini will visit and inaugurate educational establishments which UNESCO helped to rebuild.  They include facilities at the Lebanese University, where she will accompany the country’s Education Minister, Dr. Tarek Maizoub.

UNESCO was mandated by Lebanon’s Ministry of Education to lead coordination of all rehabilitation efforts by partners on the ground. The UN agency is also rehabilitating at least 115 schools, 20 technical and vocational education and training centres, and three higher education institutions.  Work on 85 schools has already been completed.

And the UN World Food Programme (WFP) warned on Tuesday that many families in Lebanon are finding it harder than ever to cope, a year on from the catastrophe.

“In the year since the explosions in Beirut port, the currency has plunged to a fifteenth of its former value and inflation has put food out of reach for much of the population,” said WFP spokesperson Tomson Phiri. “In June, WFP assisted nearly 400,000 vulnerable Lebanese, nearly 987,000 Syrian refugees and about 21,000 refugees of other nationalities.” 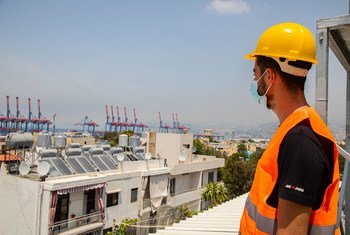 On August 4th, 2020, a devastating blast in a warehouse destroyed much of the centre of the Lebanese capital, Beirut. Many neighbourhoods were destroyed, downtown Beirut looked like a war zone. Thousands were injured and some 200 people tragically lost their lives on that day and the days that followed. For many, their property and livelihoods were literally blown away.