Unsplash/Matteo Massimi
People praying in the grounds of a temple in Yangon, Myanmar, the country's largest city.

It’s been six months since the military coup in Myanmar where there’s grave concern over the widening impact of the deepening political, human rights and humanitarian crisis affecting the country’s people.

Speaking to UN News, the organisation’s top aid official in Myanmar, Acting Humanitarian and Resident Coordinator Ramanathan Balakrishnan, described how people have been severely impacted across the country since the junta’s power grab on 1 February.

“The situation in the country is characterized now by instability and a deteriorating socio-economic and security situation and to add to that we have a raging third wave of COVID-19,” said Mr. Balakrishnan in an exclusive interview.

Highlighting the ongoing nature of armed resistance to State security forces “in several ethnic minority areas” including in the states of Shan, Chin and Kachin, the UN official said that more than 200,000 people had been uprooted from their homes there to date.

In Rakhine state before the coup, the UN Humanitarian Response Plan pointed to some one million people including internally displaced people in need of urgent assistance, but “this number has only swelled”, Mr. Balakrishnan insisted.

More widely, “following the coup, an additional two million were identified as those in urgent need of humanitarian aid, and those were largely in the urban areas of Yangon and Mandalay”, he said, adding that the intensification of clashes and the worsening socio-economic situation was pushing “tens of thousands of people” into a humanitarian space” every day.

Echoing concerns over rights abuses by UN Children’s Fund UNICEF and others, Mr. Balakrishnan condemned the ongoing and widespread use of lethal force by the military against civilian protesters.

Looking ahead, the UN’s priorities include ensuring that millions of people do not fall further into hunger, the aid official said. “There has been an increase in the price of basic commodities for many people…this has also resulted in a reduction of the nutrition value of the food basket that people usually take as they substitute their regular food with cheaper, more readily available items.”

Turning to Myanmar’s health system, which is facing extreme pressure because of the coronavirus crisis, as well as attacks on medical personnel and facilities in Myanmar - and a civil disobedience movement by some health professionals - Mr. Balakrishnan warned that even basic services had been disrupted across the country.

In a message of solidarity, the top aid official insisted that the UN remained committed to respecting the will of the country’s people.

This was despite limited access to parts of the country linked to security concerns and disruption to the banking system, which limited the UN’s ability to transfer funds to humanitarian partners responsible for delivering aid.

“The UN will continue to call out human rights violations and is committed to stay and deliver lifesaving humanitarian assistance to the people of Myanmar, in addition to sending in the COVID-19 response,” Mr. Balakrishnan said. 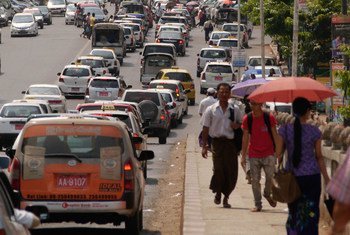 The UN independent expert on the human rights situation in Myanmar on Tuesday called for a “COVID ceasefire” for the country, as infections and deaths soar even as the military junta escalates attacks against healthcare workers. 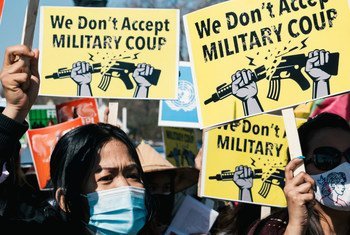 Human rights defenders in Myanmar are being targeted under a “brute force terror campaign” by the military junta, United Nations independent experts said on Monday, calling again for a stronger international response to the coup.