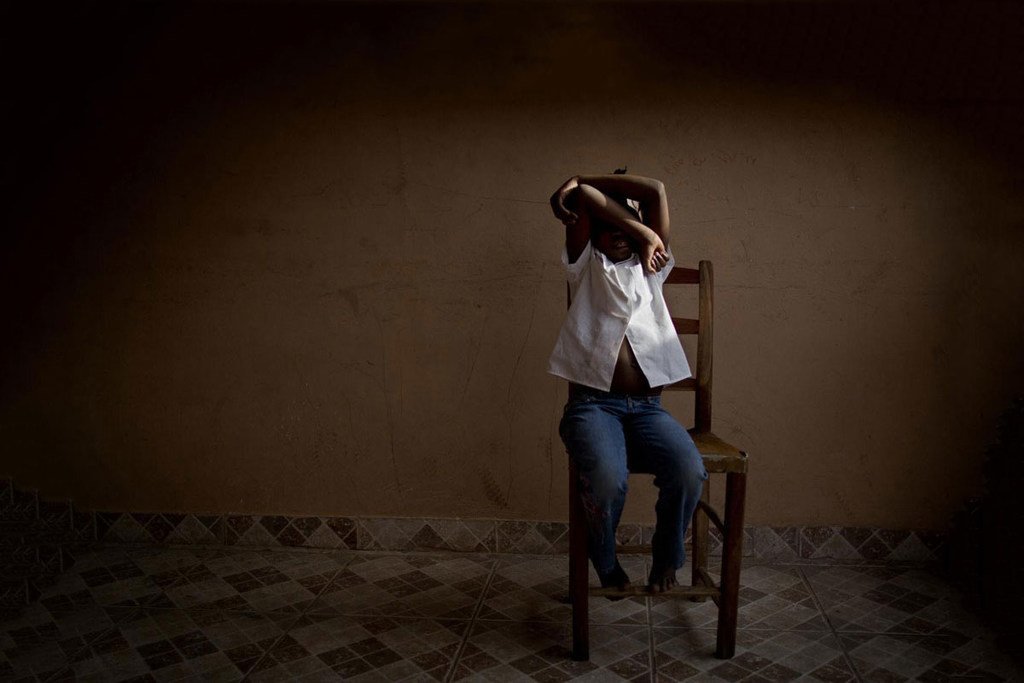 UNICEF/Marco Dormino
An eight-year-old girl hides her face at a UNICEF-supported centre in Haiti that provides temporary care and support for trafficked children while authorities search for their parents. (file)
29 July 2021
Law and Crime Prevention

UN Secretary General António Guterres on Thursday urged States to take action against human trafficking, where a third of all victims are children.

Highlighting how the COVID pandemic has pushed as many as 124 million more people into extreme poverty, the UN chief insisted that “many millions” have been left vulnerable to the scourge.

Half of victims in low-income countries are children, Mr. Guterres noted, just ahead of the World Day Against Trafficking in Persons, adding that most are trafficked for forced labour.

“Criminals everywhere are using technology to identify, control and exploit vulnerable people,” the UN chief said, adding that children are increasingly targeted through online platforms for sexual exploitation, forced marriage and other forms of abuse.

Leading up to World Day Against Trafficking in Persons let’s show appreciation for the dedication of survivors to raise awareness, support victims & work with policy makers to #EndHumanTrafficking💙
Victims’ Voices Lead the Way – let’s follow their lead.
🔗https://t.co/nBt32TjGzm pic.twitter.com/crUJQMbV1b

Coinciding with this year’s World Day, the UN Office on Drugs and Crime has launched a campaign titled ‘Victims’ Voices Lead the Way’ to put a spotlight on victims’ untold stories, and on their roles in the fight against trafficking.

Executive Director of the United Nations Office on Drugs and Crime (UNODC), Ghada Waly, said “victims’ voices are key to preventing trafficking, supporting survivors, and bringing perpetrators to justice.” Noting that the COVID-19 pandemic has deepened vulnerabilities to trafficking, she said “victims’ contributions are more critical than ever”.

UNODC assists countries and all stakeholders in implementing the Trafficking in Persons Protocol, and in developing victim-centred approaches. Through the UN Voluntary Trust Fund for Victims of Trafficking in Persons, the agency also provides essential support to victims, and helps empower them as part of the response.

Ms. Waly called on all Member States to support the fund and help amplify victims’ stories.

“Rather than being protected and assisted without discrimination as children at risk, child victims of trafficking are treated as irregular migrants or subjected to criminal prosecutions, and have their age and credibility questioned,” said UN-appointed expert on human trafficking, Siobhán Mullally.

Ms. Mullally joined the call for action, stating that “racism, xenophobia and gender-based discrimination are putting the human rights of trafficking victims at risk and enabling those who carry out the illegal trade to continue with impunity.

“Instead of being identified as victims of a serious human rights violation, victims are being arrested, detained, denied assistance and protection and even forcibly returned to countries of origin because of racial profiling and discrimination at border crossings and in criminal justice systems.”

The Special Rapporteur urged all actors involved, including the private sector, to combat racism and xenophobia in law enforcement, at borders, education systems, in work places, in child protection systems, and in humanitarian and peace operations.

She noted that when gender discrimination is added to racism and xenophobia, victims suffer even more: “Actions to combat trafficking must move beyond harmful stereotypes of ‘ideal victims’ that leave many victims and survivors without the protection and assistance they are entitled to”.

Prevention measures are also limited by racist stereotyping and xenophobia and lead to failures of identification, according to the special rapporteur.

“Too often the testimonies of victims are questioned and the harms and trauma they have endured are denied.

Failure to identify victims of trafficking lead to forced returns, arrest, detention and prosecution, family separation, and refusals of consular assistance, rather than protection and assistance.”

This includes implementation of the United Nations Convention against Transnational Organized Crime and its Protocol to Prevent, Suppress and Punish Trafficking in Persons.

Ms. Mullally also reminded countries that they have obligations in international human rights law to eliminate direct, indirect and structural discrimination, and that Convention on the Elimination of All Forms of Discrimination Against Women (CEDAW) General Recommendation No. 38 of last year reiterates the obligation of States to ensure its application to all victims without exception.

♦ Receive daily updates directly in your inbox - Subscribe here to a topic.
♦ Download the UN News app for your iOS or Android devices.
human trafficking|unodc|sexual exploitation and abuse

Trafficked and sexually exploited woman and girls can find themselves facing prosecution and conviction for those very same crimes, in some countries, a new UN report shows. The study aims to help prosecutors to better handle these complex cases, and protect the genuine victims.

Lockdowns, travel restrictions, resource cutbacks and other measures to curb the spread of the new coronavirus are putting victims of human trafficking at risk of further exploitation, while organized crime networks could further profit from the pandemic, according to the UN Office on Drugs and Crime (UNODC).