The head of the UN Children’s Fund, Henrietta Fore, announced her resignation on Tuesday, in order to devote herself fulltime to caring for her husband, who is suffering from what she described as a serious health issue.

Ms. Fore said it had been “a difficult decision”, and in a message to staff, described holding the office of Executive Director as “a tremendous honour”.

With a heavy heart, I have informed the UN Secretary-General and our Executive Board President of my decision to step down as UNICEF Executive Director in order to devote my energy to my husband’s serious health issue.

“To serve the world’s children is both exhilarating and fascinating. You have achieved remarkable accomplishments at an extraordinary time, and we have so much more to do”, she told the UNICEF team.

She said she would continue in the top job until the end of the Executive Board cycle this year and the opening of the UN General Assembly in September, and will remain “until my successor has been chosen”.

She added that in the meantime, she would continue to lead on developing the agency’s Strategic Plan, and also focus on countries’ access to COVID-19 vaccines; to help the safe return to classrooms across the world; “and further accelerate our work in both humanitarian and development contexts”, to ensure a “bright future for every child.”

In a statement issued via his Spokesperson, Secretary-General António Guterres said he full understood Ms. Fore’s decision, accepting her resignation with “deep regret.”

“The Secretary-General wishes to express his sincere appreciation to Ms. Fore for her inspiring leadership of UNICEF and for her service to improve the lives of children all around the world. In particular, he noted UNICEF’s critical role in the global response to COVID-19 and in reimagining education.”

The statement said that as a result of her leadership, UNICEF was now an organization “with a broader array of public and private sector partnerships and a bolder focus on achieving the Sustainable Development Goals.”

The UN chief thanked Ms. Fore for her “outstanding work to address the extraordinary challenges facing children and young people around the world.”

She became the agency’s seventh director in January 2018, having worked in economic development, education, health, humanitarian and disaster relief as a public servant, for more than four decades.

She became the first woman to serve in the US Government as Administrator of the Agency for International Development (USAID), and Director of US Foreign Assistance, between 2007-2009. Before that, she also served as an Under Secretary of State, at the State Department. 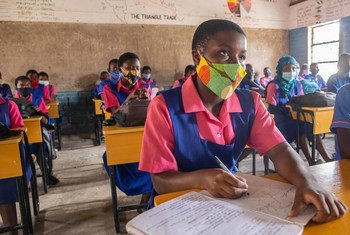 Around one in three countries are not yet implementing remedial programmes to help students catch up on their learning, in the wake of school closures due to the COVID-19 pandemic, two UN agencies and partners said in a report issued on Tuesday. 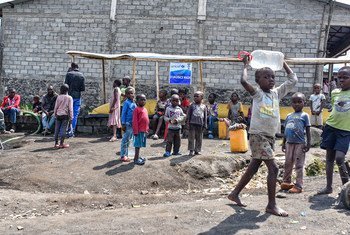 Action must be taken now to halt alarming attacks against children and abductions - including of students - in parts of West and Central Africa, the head of the UN Children’s Fund, UNICEF, said in a statement on Wednesday.