© UNICEF/Mulugeta Ayene
A young girl undergoes a health-check at a health centre in the Tigray region of northern Ethiopia.

Humanitarian operations have been gradually resuming in the war-ravaged Tigray region of northern Ethiopia, but resupply of aid and fuel for civilians caught up in the fighting is urgently needed, the United Nations said on Tuesday, citing information from its emergency relief agency, OCHA.

UN Spokesperson  Stéphane Dujarric reported that 23 displacement sites in the regional capital, Mekelle, did not have access to water as pumps could not operate due to the lack of fuel. Transportation of humanitarian and commercial supplies into the region has also been affected.

I'm deeply concerned with the present situation in Tigray. It is essential to have a real ceasefire paving the way for a dialogue able to bring a political solution - @antonioguterres. His full remarks: https://t.co/hGm7i06BjZ

Aid partners have also not been able to provide cash assistance, he added.

Meanwhile, commercial flights to and from Mekelle have not resumed after being halted roughly two weeks ago, which has affected the deployment of humanitarian workers.

Although road access was “largely possible” from the city to the Ethiopian capital, Addis Ababa, for staff rotations, supplies have been blocked from proceeding.

“It is critical to get additional staff and humanitarian and commercial supplies into Tigray, restore electricity and telecommunications, and ensure that cash and fuel are available throughout the region for the continuity of humanitarian operations,” said Mr. Dujarric, speaking during his daily briefing from New York.

The UN continues to monitor developments in Tigray, where eight months of fighting between Ethiopian troops and regional forces have left more than five million people in need of humanitarian assistance.

More than 400,000 have “crossed the threshold into famine”, Ramesh Rajasingham, OCHA’s acting chief told the Security Council on Friday, just days after the Ethiopian Government declared a unilateral ceasefire.

UN Secretary-General António Guterres this weekend said it was essential to have a real ceasefire paving the way for a dialogue that would lead to a political solution. 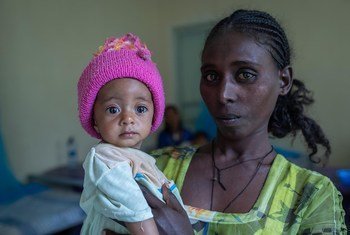