Progress towards resolving Syria’s decade-long war is unlikely, given the ‘gulf of mistrust’ among parties and complexity of conditions on the ground, the chief UN mediator for the country told the Security Council on Friday, as he urged delegates to unite around elements of resolution 2254 (2015) and called for a new international dialogue to achieve a breakthrough.

“I think we are all disappointed that we are not making real advances on the political track”, said Geir Pedersen, Special Envoy for Syria, namely constitutional reform and future elections slated to be administered under UN supervision.

Contours of a new international dialogue

Against that backdrop, he unveiled a proposal for a new international dialogue on Syria aimed at achieving steps that are reciprocal and mutual, “defined with realism and precision” and carried out in parallel.  Key players should be ready to come to the table with the necessary goodwill.

The aim is to deepen exploratory substantive consultations to identify the “very first steps that Syrian and international players could deliver”, he explained, pressing the parties to not only explore what they ask of others - but also what actions they can entertain.  “I sense that all key players are interested in deepening this conversation.”

He said he has been in regular contact with senior officials from the Russian Federation and the United States before and since the recent Geneva summit, as well as other Council members and States in the region.

He said he will soon fly to Rome for consultations with foreign ministers participating in a Ministerial Meeting on Syria convened by Italy and the US, before heading to Moscow to consult with Turkey and Iran – and then to Nur Sultan, Kazakhstan, for an ‘Astana format’ meeting in early July, which lies outside the UN framework.

Outlining areas where initial steps might be found, he pointed first to the call for action on detainees, abductees and missing persons in resolution 2254 (2015) – which calls for a ceasefire and settlement to the conflict - noting that he has engaged Syria’s Government again on the topic, seeking information on the 2 May presidential decree and recent reported releases.

He identified the resolution’s call for a nationwide ceasefire as another area for potential cooperation, as the patchwork of regional de-escalation agreements could collapse with a dramatic escalation of violence across the frontlines.  He also pointed to economic recovery and the displacement crisis as other areas for a possible common cause.

UNICEF/Ashawi
A family arrives in Afrin in northern Aleppo governorate in Syria after escaping conflict in rural Idlib. (file)

In the meantime, he said he will seek to facilitate the Constitutional Committee as an important contribution to a broader process. “I think most Syrians and most of us here in this chamber are disappointed that the Committee, which has met five times, is not yet working expeditiously to produce results.”

Civil society voices must be heard

Underscoring his priority to involve the widest spectrum of Syrian civil society in the political process he said his team has launched the first of several thematic working groups, providing a structured way for them to contribute their expertise.  A series of virtual regional consultations began earlier this week, involving 120 Syrian civil society actors – more than one third of them women.

“My own thinking continues to be shaped by these encounters with Syrians”, he said.  “The vast majority of Syrians are desperately looking for signals that the international community, despite their differences, can work together.” He urged the Council to assist his team in the weeks and the months ahead.

On climate change frontline, indigenous provide pointers to save planet 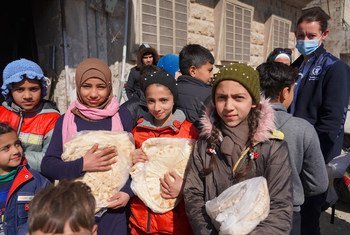 The imminent closure of the last cross-border aid lifeline to northwest Syria must be postponed beyond the 10 July deadline, UN humanitarians said on Friday, noting that no cross-line supplies had reached Idlib from Damascus, in 11 months.