In an appeal for $5 billion “to avoid famine” and support the “biggest operation in its history”, WFP spokesperson Phiri Tomson said that millions of refugees faced “uncertainty and hunger” as the impact of the pandemic on emergency aid budgets became clearer.

“The number of people teetering on the brink of famine has risen from 34 million projected at the beginning of the year, to 41 million projected as of June”, he said. “Without immediate emergency food assistance, they too face starvation, as the slightest shock will push them over the cliff into famine conditions.”

From bad to worse

According to the latest IPC food insecurity assessments - which humanitarians use to assess needs on a scale of one to five – the 41 million “are people who are in IPC phase 4 – emergency”, the WFP spokesperson explained.

Behind me is @WFP emergency assistance on the move. Cyclones &amp; conflict have turned this area in #Mozambique into a transport hub for aid and a place of refuge for people fleeing the insurgency. Families in Cabo Delgado need more support right now, not less! pic.twitter.com/Qcfp4vC9AZ

New refugee influxes linked to conflict and drought have increased needs for people in “IPC phase 5 – catastrophe” and “that number stands at 584,000 people”, Mr. Phiri continued. “These are people in Ethiopia’s Tigray region, Madagascar, particularly the southern part; South Sudan, especially as we are now at the height of the lean season in that country, and Yemen.”

Launching its Global Operational Response Plan, the UN agency highlighted operations in no less than eight countries and regions where it has had to make “brutal choices” because of significant funding shortfalls.

In practice, this has meant reduced rations “across east and southern Africa, as well as the Middle East…among some of the world’s most vulnerable people who rely on WFP to survive”, said Mr. Phiri.

West and Central Africa in crisis

For many vulnerable aid recipients in West and Central Africa, the COVID-19 pandemic has left them without the opportunity to work to supplement their rations and unable to pay for increasingly expensive staple foods. “Countries like Chad, Niger and Burkina, Mauritania; these are all countries of concern, including Sierra Leone as well,” said Mr. Phiri, after a warning by the UN agency that the world was no longer moving towards Zero Hunger.

“Progress has stalled, reversed, and today, more than 270 million people are estimated to be acutely food insecure or at high risk in 2021,” it said in a statement.

The head of the World Food Programme (WFP) appealed on Thursday for immediate access to deliver lifesaving assistance to Ethiopia’s Tigray region, where ongoing fighting between government and regional forces has put some 350,000 people at risk of famine. 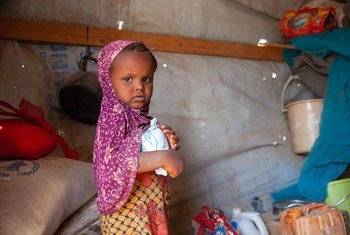 Although the World Food Programme (WFP) is ramping up support to people in Yemen’s worst hunger hotspots, in efforts to prevent famine, sustaining response through the rest of the year is uncertain, the UN agency warned on Monday.