UNICEF/Ashawi
A family arrives in Afrin in northern Aleppo governorate in Syria after escaping conflict in rural Idlib. (file)

Senior UN officials have condemned a deadly attack on a hospital in Syria this past weekend, underlining the need for accountability for crimes committed in the country’s decade-long war.

The Al-Shifaa Hospital came under fire amid shelling in the rebel-held northern city of Afrin on Saturday.

The attack on Al-Shifa hospital was appalling and I strongly condemn it. https://t.co/JJ7G7QfeA6

At least 18 civilians were killed, according to media reports, including staff and patients at the hospital.  Parts of the faciity were also destroyed.

“Such appalling attacks on civilians and civilian infrastructure, including healthcare facilities and workers, are unacceptable and must cease”, the UN Special Envoy for Syria, Geir Pedersen, said in a statement on Monday.

“All parties must fully comply with their obligations under international humanitarian law, including the protection of civilians and civilian objects. I also reiterate the Secretary-General’s call for accountability for crimes committed in Syria.”

The envoy added that the attack, and continuing violence in Syria, again underscores the importance of implementing a nationwide ceasefire, as well as renewed effort toward a political settlement.

The Al-Shifaa Hospital, one of the largest medical facilities in northern Syria, has been hit three times since 2019, according to two top UN aid officials.

They said the hospital provides an average of 15,000 medical services each month, including 350 newborn deliveries and 250 specialized surgeries.  It has been receiving financial support from the UN for the past two years.

“For the people of Syria, already beleaguered by ten years of crisis, health facilities should be safe havens”, their statement said.

They reiterated that directing attacks against civilians and civilian infrastructure, including hospitals, are strictly prohibited under international humanitarian law. 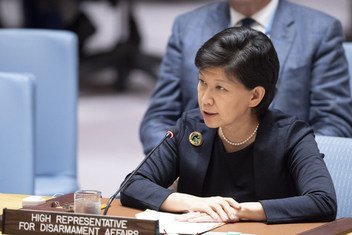 Until those responsible for any and all chemical weapons use in Syria are held responsible, the global community will continue sending a message of impunity, the senior UN disarmament official warned the Security Council on Thursday.