© UNICEF
Lucas and his brother both have albinism, which makes their skin very sensitive, their eyesight poor, and their appearance a little different from their brothers and sisters.

On International Albinism Awareness Day, Sunday, the UN chief reiterated his “solidarity with persons with albinism”.

Albinism, a rare, non-contagious, genetically inherited condition found in both men and women, presents as a lack of melanin pigmentation in hair, skin and eyes, causing vulnerability to the sun and bright light.

As a result` almost all people with albinism are visually impaired and are prone to developing skin cancer.

"We stand in solidarity with all persons with albinism, who with strength beyond all odds, continue to fight for a life that is free of discrimination &amp; violence."-- @UNHumanRights chief @mbachelet on #Sunday's #AlbinismDay. https://t.co/fhF45kxYPe pic.twitter.com/7BHffF5ubG

Secretary-General António Guterres said that this year’s theme, Strength Beyond All Odds, reflects the “resilience, perseverance and achievements” of people with albinism in the face of pervasive “misconceptions, discrimination and violence”.

While numbers vary, the UN estimates that in North America and Europe one in every 17,000 to 20,000 people have some form of albinism, but in sub-Saharan Africa, the figure is higher.

One in 1,400 Tanzanians have the condition, and in Zimbabwe and select populations in other specific ethnic groups in Southern Africa, the prevalence rises to as high as one in 1,000.

They are often the object of superstitious beliefs and myths, which not only foster their marginalization and social exclusion but also lead to various forms of stigma discrimination and violence.

Some centuries old erroneous mythologies still exist in cultural attitudes and practices globally, putting the security and lives of persons with albinism at constant risk.

“Despite these obstacles to well-being and security, leaders of organizations representing persons with albinism continue to work hard to support the most vulnerable”, said Mr. Guterres.

Meaningful commitments, such as the Plan of Action on Albinism in Africa and the work of the UN independent expert on albinism in promoting the rights of persons with albinism, have encouraged the UN chief that those with the condition are “increasingly taking their rightful place in decision-making platforms around the world”.

Yet, recognizing the “deep need to demystify the condition and end discrimination”, he acknowledged, “much remains to be done”.

The Secretary-General urged all nations and communities to “protect and fulfil the human rights of all persons with albinism and provide necessary support and care”.

In her statement marking the day, the UN High Commissioner for Human Rights, Michelle Bachelet, echoed the UN chief's call for protection.

As the pandemic exacerbates the challenges faced by people with albinism, she pointed out that in some countries, they have been "smeared with names such as 'corona' and 'COVID-19'", and some have even been "banished from their communities".

"I call on States and the international community to continue to build and strengthen partnerships with persons with albinism and organizations representing them, to ensure they are included in decision-making that concerns them and to promote their enjoyment of all human rights", said Ms. Bachelet.

Witchcraft killings of people with albinism have risen during the COVID-19 pandemic, says UN expert 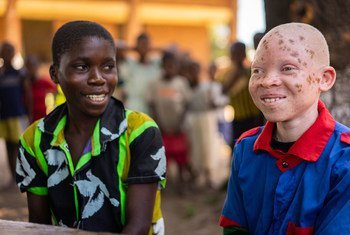 In Malawi, where children with albinism face attacks, and even ritual killings, going to school can expose them to life-threatening dangers. The UN is helping to make schools safer for these vulnerable students.