PAHO
An indigenous man receives his COVID-19 vaccination in Brazil.

Even though COVID-19 cases and deaths have declined in recent weeks, the world is facing a “two-track pandemic”, the UN’s top health official said on Monday in his ongoing campaign to get more vaccines to developing countries.

Tedros Adhanom Ghebreyesus, Director General of the World Health Organization (WHO), said unequal distribution of vaccines has allowed the virus to continue spreading, thus increasing odds of a variant emerging that could render these treatments ineffective.

Increasingly, we see a two-track #COVID19 pandemic: many countries still face an extremely dangerous situation, while some of those with the highest vaccination rates are starting to talk about ending restrictions. Inequitable vaccination is a threat to all nations. #VaccinEquity pic.twitter.com/CGECPQVbhc

“Inequitable vaccination is a threat to all nations, not just those with the fewest vaccines”, he warned in his latest media briefing from WHO headquarters in Geneva.

As of Monday, there were more than 173 million confirmed cases of COVID-19 globally, including 3.7 million deaths.

Tedros reported that new cases have dropped for six weeks, and deaths for five weeks.  Despite these “encouraging signs”, he said progress remains “a mixed picture” as last week, deaths rose in Africa, the Americas and the Western Pacific.

“Increasingly, we see a two-track pandemic: many countries still face an extremely dangerous situation, while some of those with the highest vaccination rates are starting to talk about ending restrictions”, he told journalists.

Tedros advised caution in lifting restrictions, given the increased global transmission of variants of concern, as consequences could be disastrous for those not yet inoculated.

Meanwhile, many countries still lack sufficient vaccines.  So far, nearly 44 per cent of doses have been administered in richer countries. In poorer nations, the figure is just 0.4 per cent.

The United Nations has been pressing governments to share their excess doses to the global vaccine equity initiative, COVAX. Several countries have pledged donations, which Tedros hoped will soon be fulfilled.

The WHO chief recently called for a global push to vaccinate at least 10 per cent of the world’s population by September, and 30 per cent by December. Reaching the September target will require an additional 250 million doses, with 100 million needed in June and July alone.

With the G7 summit taking place this weekend, Tedros issued an appeal to leaders.

“I also call on all manufacturers to give COVAX first right of refusal on new volume of vaccines, or to commit 50% of their volumes to COVAX this year.”

Tedros also highlighted the importance of investing in vaccine production in low income countries, including for routine immunizations.

He noted that several nations are making progress in this area, following the launch of an African Union partnership for vaccine manufacturing.

Relatedly, several companies and countries have expressed interest in participating in a WHO plan to establish a technology transfer hub to facilitate global production of mRNA vaccines. A technical review is underway.

“The biggest barrier to ending the pandemic remains sharing: of doses, of resources, of technology”, Tedros said.

Global push needed to ensure ‘clean, affordable and sustainable electricity’ for all 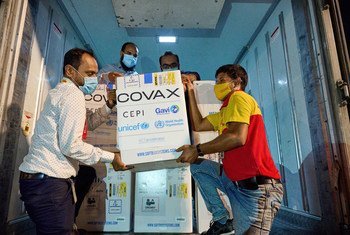 Some two billion doses of COVID-19 vaccine have been distributed globally but only 0.5 per cent have reached low-income countries where frontline health workers and the elderly have yet to receive a shot, the World Health Organization (WHO) said on Friday.