Unsplash/Pascal Brändle
A coronavirus trace and track app is displayed on a mobile phone screen.

Upholding human rights online must be part of global efforts to recover better following the COVID-19 pandemic, a group of UN independent experts said on Friday.

They stressed that “digital rights” must be a top priority as countries rebuild civic space both during and after the crisis.

#RightsCon: As the world rebuilds civic space during and after the COVID-19 pandemic and beyond, UN experts stress that #HumanRights apply online, as offline, and #DigitalRights must be a top priority.Learn more 👉 https://t.co/pxMFGMZWdA#StandUp4HumanRights pic.twitter.com/OV2EBSVOSF

“Despite the instrumental role of the internet and digital technologies, which have provided new avenues for the exercise of public freedoms and access to health and related information and care in particular during the COVID-19 pandemic, States continue to leverage these technologies to muzzle dissent, surveil, and quash online and offline collective action and the tech companies have done too little to avert such abuse of human rights,” they said.

The human rights experts were concerned that these patterns of abuse will continue after the pandemic, further worsening inequalities worldwide.

Their statement, issued ahead of next week’s RightsCon summit on human rights in the digital age, calls for collective action “to embrace the fast-pace expansion of digital space and technological solutions that are safe, inclusive and rights-based.”

Post-pandemic recovery efforts must address serious threats contributing to the closing of civic space and suppression of free speech and media freedom, they said, such as internet shutdowns during peaceful protests.

Other threats include digital divides and barriers to accessing basic human rights and services, as well as attacks on independent and diverse media, “algorithmic discrimination”, targeted surveillance, and online threats against human rights defenders.

They pointed out that the pandemic has especially heightened “digital inequalities and discrimination” against people of African descent, minority groups, communities facing religious and ethnic discrimination, and women and girls.

The UN experts said governments, as well as the tech sector, must take additional action so that their efforts reach people who are at greatest risk of being disproportionately affected.

Underscoring that “we must leave no one behind – online or offline”, they recommended that platforms must be inclusive through engaging people on the ground and stepping up investment in the world’s least developed countries.

At the same time, States must also maintain their obligation to promote and protect human rights. For example, initiatives to regulate online spaces should be “grounded in human rights standards”.

The experts also called on companies to stop supplying governments with spyware tools, facial recognition applications, and other technologies that reinforce risks for activists and civil society representatives exercising their legitimate right to voice concerns and defend human rights.

When States of Emergency Collide: COVID-19, Counter-Terrorism and Transnational Data Flows will be among the topics they will be discussing at RightsCon, which runs from 7-11 June.

The nine experts who issued the statement monitor issues such as human rights while countering terrorism, and the right to freedom of peaceful assembly and association.

They were appointed by the UN Human Rights Council and are not UN staff members, nor do they receive a salary from the Organization. 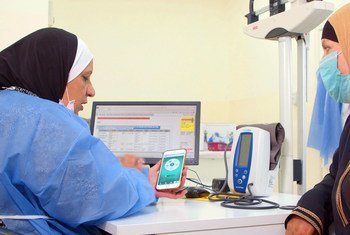 Ensure digital technologies are 'a force for good', Guterres says in message for International Day

Although the COVID-19 pandemic has accelerated digital transformation across the planet, millions worldwide still lack Internet access, the UN Secretary-General António Guterres said on Monday, highlighting why information and communication technologies (ICTs) must be “a force for good.”