© UNICEF/Olivia Acland
Flowing lava from the volcanic eruption of Mount Nyiragongo in DR Congo on 22 May has forced more than 5,000 people to cross the border into Rwanda.

The threat of new volcanic eruptions from Mount  Nyiragongo in the Democratic Republic of the Congo (DRC) have triggered thousands of residents to flee from the eastern city of Goma, the UN humanitarian office said on Friday.

Speaking at a UN news briefing in Geneva, Jens Laerke, spokesperson for the UN Office for the Coordination of Humanitarian Affairs (OCHA) said that “thousands of residents from Goma in the eastern Democratic Republic of the Congo (DRC) are displaced and on the move after an order from the authorities to evacuate areas that are at risk by further volcanic eruptions of Mount Nyiragongo”.

“The first eruption on 22 May killed over 30 people and the Goma Volcanological Observatory has warned that the risk of a new eruption is real”, he added.

The eruption of Mount Nyiragongo has forced tens of thousands of people to flee #Goma by road and boat.IOM is tracking those movements in places like the port of Bukavu, and at official entry points to neighbouring Rwanda. pic.twitter.com/NoGegDSr6W

People 'moving in all directions’

Five days after the eruption, the Governor of North Kivu ordered people in ten districts of Goma – a city of some 670,000 inhabitants – to evacuate as a precautionary measure.

As strong tremors reached up to a 4.9 magnitude on the Richter scale, there are concerns that they could cause more lava to escape from the many cracks in the mountain.

“It is not known exactly how many have now left the city, but approximately 400,000 people are potentially affected by the evacuation order”, Mr. Laerke reported, adding that “large traffic jams were observed yesterday on the main exit roads from Goma, people are moving in all directions, mostly on foot, carrying what they can, but also in cars, and on boats”.

Until now, the humanitarian focus has been on people directly affected by the volcanic eruption and neighbourhoods in Goma that are without access to water.

“This crisis is happening against the backdrop of a situation of already high needs in North Kivu”, explained the spokesperson.

According to the UN refugee agency, UNHCR, the Government of Rwanda is proactively caring for displaced Congolese people.

“As of yesterday evening, some 4,000 people have arrived from the DRC to Rwanda due to the volcanic activity and more are coming”, said Babar Baloch, UNHCR’s spokesperson.

“They are currently in two main locations: Rugerero, which hosts more than 3,000 people and Busa Sanana, which has nearly 700, 682”.

Before last weekend, Mount Nyiragongo's last major eruption was in 2002, which killed 250 people and left 120,000 homeless.

Its deadliest surge happened in 1977, when it took the lives of more than 600 people. 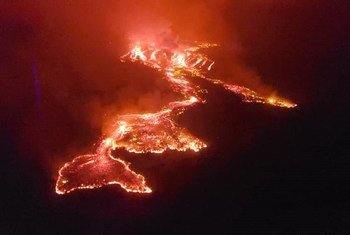 The UN Children’s Fund (UNICEF) said on Sunday that hundreds of children and families in the Democratic Republic of Congo’s (DRC) Goma district are at risk following the volcanic eruption of Mount Nyiragongo. 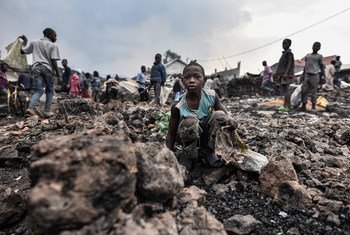 Up to 400,000 could be displaced by new Goma eruption in DR Congo, warns UNICEF

With fears that one of the world’s most active volcanoes could erupt again in the Democratic Republic of the Congo (DRC), the UN Children’s Fund (UNICEF) is warning that up to 400,000 – nearly 280,000 children – could be displaced and in need of protection or support, if the current exodus continues.