Unsplash/Lucas Davies
A Ryanair plane at an airport in Italy. (file)

5 things you should know about ICAO, the UN aviation agency

In response to the apparent forced landing of a commercial passenger plane in the Belarusian capital, Minsk, the International Civil Aviation Organization, ICAO, convened an urgent diplomatic meeting on Thursday. What is ICAO saying about the incident, and what powers does the agency have?

The Second World War was a period of rapid developments in aircraft technology. Towards the end of the conflict, in 1944, in anticipation of the growing popularity of civilian and freight air travel, the US Government invited delegates from allied states to Chicago to thrash out the first international Convention on Civil Aviation, commonly known as the “Chicago Convention”.

The prime objective of this document is the development of international civil aviation “in a safe and orderly manner”, and the establishment of air transport services “on the basis of equality of opportunity and operated soundly and economically.”

In 1947, ICAO was set up as a UN Specialized Agency, to organize and support the intensive international co-operation which the fledgling global air transport network would require. It is based in Montreal, Canada.

ICAO
Diplomats meet in Chicago in 1944, where they drafted the Convention on International Civil Aviation

2) Today, the agency ensures the smooth running of the global network…

The international air transport network, says the agency, is one of the greatest practical examples of international cooperation, but ensuring the network functions, means making sure that everyone is following the same rules. This remains ICAO’s key role.

The agency researches new air transport policy, and standardization innovations; holds events to explore the latest developments in this area; and provides governments with advice on establishing new international standards and recommended practices for civil aviation.

3) …but it does not police the skies

Like the UN as a whole, the strength of ICAO lies in its ability to bring together large numbers of countries, to forge international agreements. However, it is not a global regulator, and has no power to police the skies.

ICAO cannot arbitrarily close or restrict a country’s airspace, shut down routes, or condemn airports or airlines for poor safety performance or customer service. Countries make their own regulations, which airline operators must follow when they enter national airspace and airports.

If a country does breach standards that have been internationally agreed and adopted through ICAO, the agency’s role is to help countries to come up with a coordinated response, such as this week’s incident.

On Sunday, 23 May, a Ryanair flight from Greece to Lithuania was reportedly diverted to Minsk airport, where several passengers were forced off the plane, including high-profile opposition journalist, Roman Protasevich.

A chorus of condemnation from nations, rights organisations and the UN system followed: the UN Secretary-General, António Guterres, expressed his deep concern, and called for a full, independent investigation, and the spokesperson for the Office of the High Commission for Human Rights (OHCHR) said that the manner in which Mr. Protasevich was abducted, and brought to Belarus, “was tantamount to an extraordinary rendition”.

ICAO responded by publishing a Tweet, on the day of the incident, in which the organisation noted that it was “strongly concerned by the apparent forced landing of a Ryanair flight and its passengers, which could be in contravention of the Chicago Convention.” A day later, the agency announced, again on Twitter, an urgent meeting of the ICAO Council on 27 May.

Belarus, meanwhile, is reportedly insisting that the diversion was necessary due to a bomb threat, and has denounced condemnation of the incident as a planned provocation.

It is possible that the urgent ICAO meeting leads to the “full, independent investigation” that the Secretary-General is calling for but, as mentioned above, the agency is not a global regulator, and does not have the power to take action against Belarus, such as shutting down the country’s airspace, or any other sanction.

In the meantime, European Union leaders have announced economic sanctions and plans to ban Belarusian airlines from European airspace and airports. These moves have been welcomed by the United States, where the Biden administration says that it is assessing “appropriate options”.

♦ Receive daily updates directly in your inbox - Subscribe here to a topic.
♦ Download the UN News app for your iOS or Android devices.
belarus|Chicago Convention|Hijacking

Boost regional cooperation, for the ‘sake of peace and prosperity,’ Belarus tells global leaders at UN 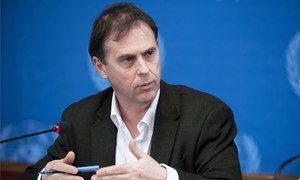 The Office of the UN High Commissioner for Human Rights (OHCHR) has strongly condemned the arbitrary detention of an opposition journalist in Belarus, calling it an “astonishing episode” that heralds a new phase in the campaign of repression against journalists and civil society there. 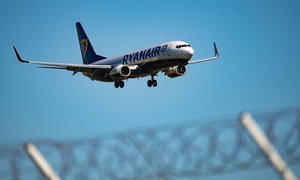