UN News/Daniel Dickinson
The UN and Samoan flags are raised in the capital, Apia, for the UN Conference on Small Island Developing States.

The UN has called for dialogue in Samoa, where the first woman elected as Prime Minister was locked out of Parliament on Monday amid a bitter power struggle with the country’s long-standing leader.

Fiame Naomi Mata'afa was sworn in during a makeshift ceremony held in a tent on the statehouse lawn in the capital, Apia.

Her party, known by the acronym FAST, narrowly won the 9 April general election, which sparked a month of legal challenges and calls for a second round of voting.

UN Secretary-General António Guterres has been following developments since the elections, according to a statement issued later on Monday by his Spokesperson.

“He urges the leaders in Samoa to find solutions to the current political situation through dialogue in the best interest of the people and institutions of Samoa”, it said.

“The United Nations stands ready to provide support to Samoa if requested by the parties.”

Samoa is a Pacific island nation of approximately 200,000 people and this was the closest-run election in its history.

Ms Mata'afa, 64, is a former Deputy Prime Minister and will join Jacinta Arden of New Zealand as one of the only women leaders in the region.

The FAST party was founded last June, challenging the ruling Human Rights Protection Party (HRPP) which has been in power for nearly 40 years.

Both parties won 25 seats each in the election, but the lone independent parliamentarian sided with FAST.

Despite a challenge by the HRPP, the Supreme Court upheld the result and ordered the swearing-in ceremony to take place.

However, over the weekend, Samoa’s Head of State, Tuimalealiifano Vaaletoa Sualauvi II, suspended the parliamentary hearing on Monday for the ceremony.

The Supreme Court subsequently ruled that it should go ahead, but FAST members and supporters found the Parliament doors locked when they arrived on Monday morning. 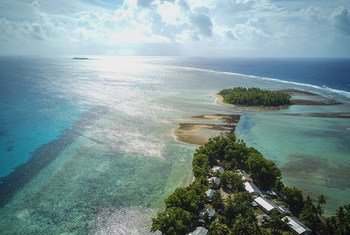 Facing constant threats from climate change and wary of the possible spread of COVID-19 to their shores, Pacific Island leaders on Friday touted their own environmental action plans and called for more aggressive climate action from other nations, including rapid shifts toward clean energy.