One hundred days since the Myanmar military seized power, the "brutal" repression of protesters has continued, despite all international efforts to end the violence, the UN rights office (OHCHR) said on Tuesday.

“The military authorities are showing no sign of letting up in their brutal crackdown on opponents in a bid to consolidate their hold on power”, spokesperson Rupert Colville told journalists at a media briefing.

According to credible reports, as of 10 May, at least 782 people have been killed as security forces used unnecessary, disproportionate and lethal force, to suppress demonstrations and other forms of public participation, since the military coup on 1 February.

“While much of the world’s attention has been on the number of peaceful protesters and bystanders killed by the security forces, the authorities continue to commit other gross human rights violations against the people of Myanmar”, added Mr. Colville.

The OHCHR spokesperson called for greater international involvement to prevent the human rights situation there from deteriorating further.

In particular, he urged the Association of Southeast Asian Nations (ASEAN) to “react quickly and to intensify its actions” to ensure Myanmar’s military leadership adheres to the commitments it made in the five-point plan agreed at the regional bloc’s meeting of leaders on 24 April, in Jakarta.

The five-point consensus agreed to an immediate cessation of violence in Myanmar and that dialogue should be held among all parties to seek a peaceful solution in the interests of the people.

Guterres: Respect the will of the people

Meanwhile, UN Secretary-General António Guterres continues to stand with the people of Myanmar, his Spokesperson said in a statement issued later on Tuesday.

The UN chief has renewed his call on the military to respect the will of the people and act in the greater interest of peace and stability in the country.

He encouraged ASEAN “to swiftly follow through on its own commitments”, while urging the international community to support regional efforts and also respond to the increased humanitarian needs.

“The Secretary-General’s Special Envoy, Christine Schraner Burgener, is in the region and continues to engage intensively with a range of key stakeholders, including in light of the broader ramifications of the crisis. She continues to promote coherent international action,” the statement said.

‘Daily raids’ on homes and offices

Mr. Colville went on to note that there are daily raids on private homes and offices, with more than 3,740 people currently in detention, including many in situations that may amount to enforced disappearances.

“Of those in custody, the vast majority have not been brought before a judge, while most of the 86 people prosecuted thus far have been tried in secret, with limited or no access to any form of legal counsel”, he said.

“Military tribunals and courts martial have been established in several townships in which martial law was declared. At least 25 individuals have received the death sentence to date – some 20 of whom were tried in absentia.”

Over the past month, the military leadership has issued more than 1,561 arrest warrants against civil society activists, trade unionists, journalists, academics, public personalities and online voices, driving the vast majority of them underground.

“To intensify pressure, the military authorities have resorted to taking relatives of wanted people into custody to force them to turn themselves in to the police”, Mr. Colville said, adding that there is also increasing pressure on civil servants to go back to work.

In recent weeks, more than 3,000 civil servants – nearly 70 per cent women – have been dismissed, removed, or suspended by the coup leadership. Those suspended also include 990 university professors, researchers and assistants.

In addition, there are reports that up to 11,000 more workers in the education sector were suspended on Monday.

‘Deeply concerned’ for those fleeing persecution

According to the UN refugee agency (UNHCR), several hundred people from Myanmar have crossed into Thailand and India in recent weeks.

The people seeking safety outside Myanmar must receive such protection and support from Myanmar’s neighbours, Mr. Colville urged, adding that while it can take time to decide whether an individual fleeing the country is a refugee or not, “at the very least they should be treated as an asylum seeker and not forced to go back”.

“This is particularly important for people with jobs as sensitive as journalists and those active in the civil disobedience movement, opposing the Tatmadaw (Myanmar’s military).” 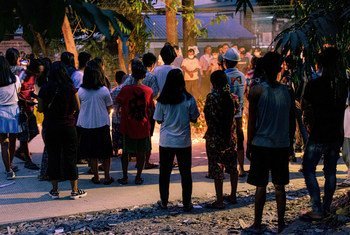 The United Nations independent human rights expert on Myanmar on Friday called on countries that have not yet done so, to impose arms embargo on the country urgently, to stop the “massacre” of citizens across the country.