In a statement, the experts said that the appointment process “failed to implement the essential requirements of the Paris Principles, including the need for an open, transparent and participatory process with broad consultations”.

“We are deeply concerned that the appointment process is not in line with international standards and that it undermines the independence, integrity and legitimacy of the National Human Rights Commission (NHRC), which restricts the ability of the people of Nepal to access appropriate remedies for alleged human rights violations.”

“This will have a chilling effect on civil society actors”, the experts said, calling on the Government to reverse the appointments and to “facilitate a new process marked by openness, transparency, broad consultation and participation”.

An independent and impartial national human rights institution is critical for the promotion and protection of civic space and in particular the right to assemble and associate, the statement noted, adding that it is also vital to the transitional justice process, and ensuring accountability for crimes committed during Nepal’s armed conflict, including extrajudicial killings, enforced disappearances and torture.

The experts have communicated their concerns to the Government of Nepal, the statement noted.

Failure to adhere to domestic law

The experts also highlighted that the appointments failed to adhere to domestic law, as enshrined in the Constitution of Nepal, and that authorities showed unwarranted haste in avoiding crucial processes such as the parliamentary hearing.

According to their statement, the President of Nepal, through an ordinance on 15 December, amended the Constitutional Council – which recommends appointments to Constitutional bodies, including the NHRC – clearing the way for it to hold meetings without a quorum and take decisions based on a simple majority.

Under Nepali law, appointments to Constitutional bodies must also be confirmed through a parliamentary hearing process, which could not take place because the President dissolved the House of Representatives.

On 3 February, the President appointed five new members to the NHRC, despite the fact that legal petitions challenging the constitutionality of the ordinance were pending at the Supreme Court.

In late February, the Court reversed the President’s dissolution of the House of Representatives, but hearings on petitions against the ordinance and appointments to Constitutional bodies are yet to take place.

Avoid any perception of bias

The experts also urged the Chief Justice of Nepal to recuse himself from the review of the petitions by the Court “to avoid any perception of lack of independence or bias”, as he was part of the Constitutional Council that recommended the appointments.

The human rights experts making the call included special rapporteurs on the rights of peaceful assembly and of association; on the situation of human rights defenders; on the independence of judges and lawyers; and on torture and other cruel, inhuman or degrading treatment or punishment; as well as the members of the Working Group on Enforced or Involuntary Disappearances. 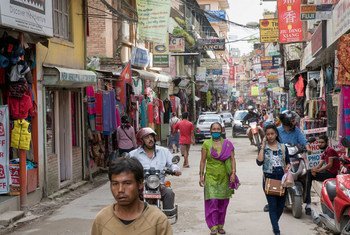 Shocked over the killing last weekend of five men in Nepal, who had planned to escort home one of their girlfriends from a higher caste, the UN human rights chief on Friday stressed that ending caste-based discrimination is “fundamental” to the overall sustainable development vision of leaving no one behind.