UN Photo/Eskinder Debebe
UN Special Coordinator for the Middle East Peace Process, Tor Wennesland briefs (over video conference) the Security Council on the Situation in the Middle East, including the Palestinian question.
22 April 2021
Peace and Security

Expectations are high for the first Palestinian elections in 15 years, UN Middle East envoy Tor Wennesland told a virtual meeting of the Security Council on Thursday, urging international support for the process.

“The successful completion of inclusive Palestinian elections is a critical step toward renewing democratic legitimacy of the Palestinian Government”, he said, speaking from Jerusalem.

In his briefing to #SecurityCouncil, #UN Envoy @TWennesland: The holding of credible elections in #Palestine is a crucial step towards renewing the legitimacy of national institutions & reestablishing Palestinian national unity. I encourage international support to this effort.

“These elections should also pave the way to uniting Gaza and the West Bank under a single, legitimate national authority, which would be an important step towards reconciliation and could advance Middle East peace.”

Preparations continue for the Palestinian Legislative Council elections set for 22 May, he reported.

Registration of candidates concluded on 31 March, and the final lists are expected on 30 April, the start of the official campaign period.

“Since my last briefing, a growing number of young people are expected to participate in shaping their political future and having the opportunity to vote for the first time”, he said.

The UN has been supporting the electoral process, engaging regularly with parties and with the Central Elections Committee (CEC).

“To date, the CEC has performed its duties with professionalism and integrity, enhancing trust in the electoral process”, he said.  “I also underscore the critical role of election observers to ensure respect for the results of a credible and transparent process.”

As of Thursday, there were more than 316,000 confirmed COVID-19 cases in the occupied Palestinian territory, according to data from the World Health Organization (WHO).

Addressing the crisis, he said COVID-19 continues to pose  “a formidable threat” across the occupied Palestinian territory and vaccination must be ramped up.

© UNICEF-SoP
The State of Palestine received the first shipment of the Pfizer and Astra Zeneca COVID-19 vaccine from the COVAX facility on 21 March 2021.

“I am seriously concerned by the significant rise in active cases in Gaza where the daily infection rate is reaching its highest level since the onset of the pandemic.  In the West Bank, many hospitals remain at or near full capacity”, he said.

The envoy updated ambassadors on the vaccination campaign which the Palestinian authorities rolled out last month.

More than 300,000 doses have been delivered so far, he reported, and Israel also has continued efforts to vaccinate segments of the Palestinian population in the West Bank, including East Jerusalem.  Additionally, more than 100,000 Palestinians who have permits to enter Israel, have also been inoculated.

“As the socio-economic impact of the pandemic has significantly exacerbated a seemingly never-ending fiscal and economic crisis in both the West Bank and Gaza, support for the Palestinian Government’s response must continue to be a priority,” Mr Wennesland said.

“I welcome all efforts carried out thus far to vaccinate the Palestinian population, but the process needs to be accelerated and more vaccines are needed.”

♦ Receive daily updates directly in your inbox - Subscribe here to a topic.
♦ Download the UN News app for your iOS or Android devices.
Israel|Occupied Palestinian Territory|elections|COVID-19 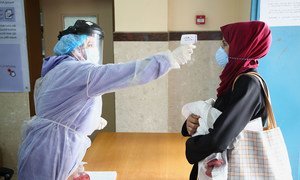