Bajanpro
Ash from the eruptions of the La Soufrière volcano covers a town in St Vincent and the Grenadines.

Following a series of powerful eruptions from La Soufrière volcano on the Caribbean island of Saint Vincent, the UN chief on Monday expressed deep solidarity with the country’s people and Government.

“This crisis comes at the most difficult time, as the world is grappling with the impact of the COVID-19 pandemic and ahead of the hurricane season”, Secretary-General António Guterres said a statement issued by his spokesperson.

“The Secretary-General commends the local response efforts underway and reiterates the full support of the United Nations”, said Stéphane Dujarric.

Saint Vincent and the Grenadines, located in the southern Caribbean, consists of more than 30 islands and cays, nine of which are inhabited.

At 4,000 feet tall (1,220 metres), La Soufrière dominates the largest island, Saint Vincent.  Though silent since 1979, the volcano began spewing smoke, and rumbling in December, before a full-blown eruption on 9 April.

Mr. Dujarric said that the UN Office for Coordination of Humanitarian Affairs (OCHA) will announce tomorrow the release of $1 million from the Central Emergency Response Fund (CERF) to assist the response.

“The United Nations…stands ready to provide additional help”, he added.

Meanwhile over the weekend, Didier Trebucq, UN Resident Coordinator for Barbados and Eastern Caribbean, along with the representatives from the UN Children’s Fund (UNICEF), World Food Programme (WFP) and Pan American Health Organization (PAHO) took a 10-hour boat ride to Saint Vincent and the Grenadines to assess the situation for response and recovery efforts.

With local authorities they visited several sites hosting families who were forced to evacuate following the eruption 10 days ago.

Bajanpro
UN Resident Coordinator Didier Trebucq (pointing) and Prime Minister Ralph Gonsalves, along with other UN agency officials, travel to the Red zone to assess the impact of La Soufrière volcano eruption in St. Vincent and the Grenadines.

There are around 15,000 evacuees in need immediate assistance, the UN official reported via Twitter, adding that there are many sights of desolation and new threats of eruptions.

As Vincentians continue to be evacuated from the orange zone, the UN representatives traveled into the red zone, where Mr. Trebucq said that abandoned villages are “covered by heavy ashes…and paved roads have been turned into tracks”.

“Cleanup, ecological and human assets recovery will require a massive effort”, he added. 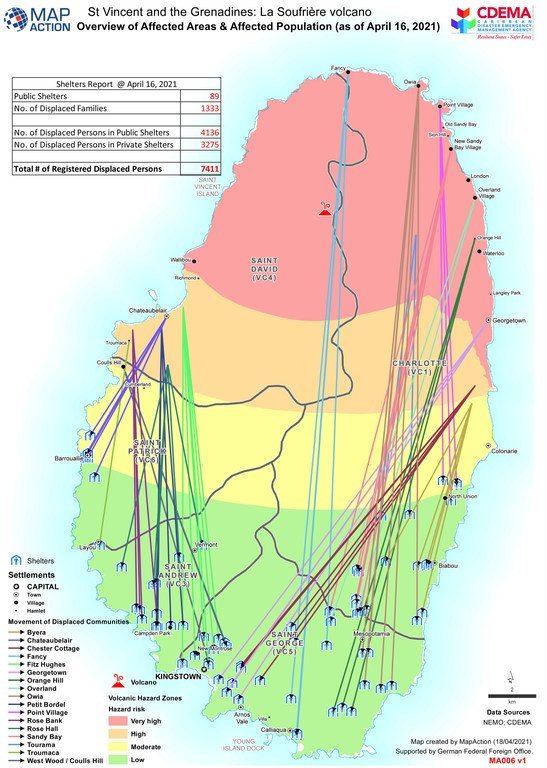 CEDMA
Map showing affected areas and population following the eruptions of the La Soufrière volcano in St. Vincent and Grenadines as of 16 April 16, 2021.
♦ Receive daily updates directly in your inbox - Subscribe here to a topic.
♦ Download the UN News app for your iOS or Android devices. 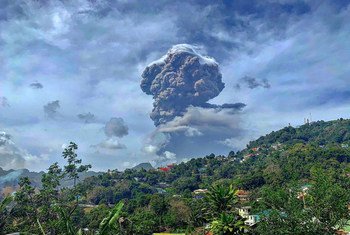 Last week’s eruption of La Soufrière volcano in Saint Vincent and the Grenadines, has left the entire population of the main island without clean water and electricity, the UN Spokesperson said on Monday. 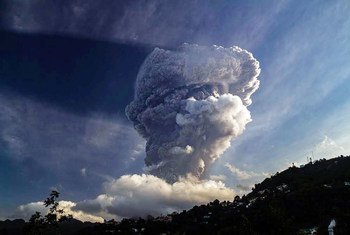 The UN is set to launch a funding appeal to support Saint Vincent and the Grenadines, where ongoing volcanic “explosions” continue to disrupt life in the Caribbean island nation and nearby countries, a top official in the region said on Wednesday.