In addition to the political strife across the country, renewed fighting between Myanmar’s military and ethnic armed organizations in some border areas, including airstrikes in Kayin province, are driving people to flee within the country and across borders.

The people being forced to flee from #Myanmar should be given sanctuary in neighboring countries.They must not be returned to a place where their lives or freedom may be at risk. This principle of non-refoulement is a cornerstone of international law + is binding on all states. pic.twitter.com/YGF4ThGrOG

Gillian Triggs, Assistant High Commissioner for Protection at UNHCR, said in a press note that “it is vital that anyone crossing the border, seeking asylum in another country, is able to access it”.

“Children, women and men fleeing for their lives should be given sanctuary. They must not be returned to a place where their lives or freedom may be at risk. This principle of non-refoulement is a cornerstone of international law and is binding on all states”, she said.

The situation across Myanmar has deteriorated rapidly since the military coup on 1 February. According to OHCHR, at least 510 peaceful protesters have been killed by the security forces, and over 2,600 are in detentions, including many held incommunicado or forcibly disappeared.

“Night raids, mass arrests and killings have become daily occurrences throughout the country”, the OHCHR South-East Asia Regional Office said in a news release on Thursday.

“De facto military authorities have increasingly resorted to heavy weaponry such as rocket-propelled and fragmentation grenades, heavy machine guns, and snipers to kill demonstrators in massive numbers”, it added.

The crackdown has also claimed the lives of at least 35 children and left countless more with serious injuries. Millions have also been directly or indirectly exposed to traumatizing scenes of violence, threatening their mental health and emotional wellbeing, UN Children’s Fund (UNICEF) said earlier this week.

On Wednesday, Christine Schraner Burgener, UN Special Envoy on Myanmar, warned that the security and economic consequences of the crisis in the wider region are worsening, and the influx of refugees at the Indian and Thai borders as well as elsewhere “ominous and likely just the beginning”.

‘Stand in solidarity’ with people of Myanmar

OHCHR also said that it received reports that some individuals, who fled Myanmar in search of safety in the region have been forced to return to the country.

“No one should face the risk of being returned to #Myanmar when their lives, safety or fundamental human rights are threatened,” @OHCHRAsia Rep. Cynthia Veliko said in a statement urging States to protect those fleeing violence, persecution. Read more 👉https://t.co/cSaz3JwjDs pic.twitter.com/fjjE3JWhrY

Cynthia Veliko, South-East Asia Regional Representative of the UN High Commissioner for Human Rights underscored that “no one should face the risk of being returned to Myanmar when their lives, safety or fundamental human rights are threatened”.

“Now is the time for us to stand in solidarity with the people of Myanmar.”

States in the region should also ensure effective search and rescue, and refrain from intercepting or pushing back those who are trying to access sea or land routes to reach safety, the UN human rights office added.

“As the situation in Myanmar deteriorates further, we call on states to continue their lifesaving humanitarian tradition of safeguarding the lives of all those forced to flee”, she urged.

Ms. Triggs also noted that it is a “proven fact” that humane border practices can be upheld amid public health and other border control measures, to ensure that people in need of protection can access territory and asylum.

Across the region, UNHCR and partner organizations stand ready to step-up support to national and local authorities to ensure that refugees receive the protection they need, she added.

IOM 2016/Ko OO
According to estimates one in four people in Myanmar are migrants, either internal or international. In this file photo, migrant workers commute to their workplace in the Mandalay region.

‘Suspend deportations’ while Myanmar is in crisis

The UN human rights office also urged countries to put in place measures to ensure migrants from Myanmar – millions of whom live and work across the region – do not fall into situations of irregularity, as many may be fearful of returning to renew their visas.

“We call on countries in the region to suspend deportations of Myanmar migrants who are undocumented or otherwise in irregular situations, and to provide them with a secure legal status while their country remains in crisis”, Ms. Veliko said.

OHCHR also called on the countries to look to safe, non-custodial alternatives to the detention of undocumented migrants.

Avoiding immigration detention is also an important practical response in light of the heightened risk of COVID-19 transmission within detention centres, the office added.

UN ‘committed to staying and delivering’ for people

Also on Thursday, the UN Country Team (UNCT) in Myanmar reiterated its commitment to “staying and delivering for the people of Myanmar at this challenging time”.

The UNCT in Myanmar consists of some 21 UN agencies and offices, which in addition to their regular programming, have also been providing humanitarian assistance to nearly a million people – who were identified at the start of the 2021, including more than 350,000 internally displaced people. 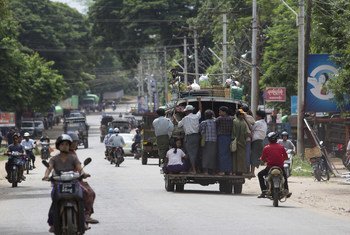 The independent UN Special Rapporteur investigating human rights in Myanmar has called on the international community to hold an “emergency” summit of all stakeholders, including the parliamentarians who were democratically elected prior to February’s military coup.