© UNICEF/Ali Almatar
A displaced family living in a makeshift tent in a camp in northern rural Aleppo, Syria.

“After a decade of war, many Syrians have lost confidence that the international community can help them forge an agreed path out of the conflict. I am convinced that we still can, along with the Syrian parties themselves”, he said in a video message to the fifth Brussels Conference, co-chaired by the European Union and the UN.

For millions of Syrians, the humanitarian aid &amp; protection brought by the @UN &amp; partners is their only source of survival.But the situation keeps getting worse, not better.Ending the conflict &amp; suffering is our joint responsibility. pic.twitter.com/4VhE5PI5xr

The virtual gathering was held to mobilize support for people inside Syria, and for Syrian refugees and host countries in the region.  It ended with $ 4.4 billion in funding for this year, and another $2 billion for 2022 and beyond.

The UN chief pressed Governments to step up their financial and humanitarian commitments to Syrians and to the nations that have provided shelter to millions fleeing the conflict.

“The war in Syria is not only Syria’s war”, he stressed.  “Ending it, and the tremendous suffering it continues to cause, is our collective responsibility.”

This year, more than 13 million people inside Syria will require humanitarian assistance, which represents a 20 per cent increase over 2020, Mr. Guterres said.  Another 10.5 million Syrian refugees and host communities in the region will also need support.

“Syria’s economy has been ravaged and now the impacts of COVID-19 have made things worse.  Almost half of all families lost their source of income”, he continued. “Nine in ten Syrians are living in poverty.”

The Secretary-General said the UN will be “relentless” in pursuing a negotiated political settlement to the conflict, in line with Security Council Resolution 2254, which also calls for a ceasefire.

His Special Envoy for Syria, Geir Pedersen, reported that although the situation on the ground has been relatively calm, with stable frontlines for over a year now, peace remains elusive.

“In a context where military tensions remain high and frequent eruptions of violence continue to occur, where hospitals and civilians are still getting hit, and where five foreign armies operate in proximity from one another, flames can ignite anew at any time”, he said, speaking from Oslo.

“Progressing towards the nationwide ceasefire that Security Council resolution 2254 has called for, remains more urgent than ever.”

Mr. Pedersen and his team are continuing their engagement, including towards facilitating the next session of the Constitutional Committee, one of the issues outlined in the UN Resolution.

“Above all, what is required today to be able to respond to the staggering challenges facing Syria and the aspirations of its people to achieve peace is indeed international unity”, he said.

“Unity in pledging the necessary financial support, of course.  Unity in backing the efforts of the UN to facilitate the implementation of all aspects of resolution 2254.  And unity in promoting the identification of mutual and reciprocal steps that will enable progress to that end.”

© UNICEF/Delil Souleiman
As cold weather sets in, the needs of vulnerable children in the Al-Hol camp in northeastern Syria become greater.

Throughout March, the UN has been commemorating the 10th anniversary of the Syrian war. Parallel to the pledging conference, the UN General Assembly in New York held an informal meeting looking at the humanitarian situation and human rights in the country.

Delivering aid at a great cost

Assembly President Volkan Bozkir told ambassadors the crisis has left specific groups especially vulnerable, including children, some of whom have been forced to work so that their families can survive.

“For girls, the situation is even worse as they are being forced into early marriage; and are thus likely to never return to a classroom, and to experience gender-based violence in their adult life, just as the current generation of Syrian women have”, he said.

The UN and its partners continue to provide relief amid the crisis.  Last year, they delivered aid to more than seven million people a month.  But as Mr. Bozkir observed, this sometimes comes at great cost as 14 humanitarian workers have been killed in northwest Syria over the past 14 months. 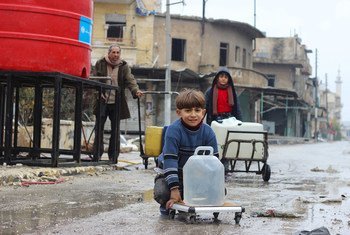