Women need to be “front and centre” of the pandemic recovery as a matter of economics, efficiency, effectiveness and social resilience, the UN chief told the women’s commission on Tuesday.

“Male-dominated teams will come up with male-dominated solutions”, Secretary-General António Guterres warned a virtual town hall with women civil society during the 65th session of the Commission on the Status of Women (CWS).

“We cannot go back to the failed man-made policies that have resulted in the fragility we see around us – in healthcare systems, in social protection, in access to justice, and in the wellbeing of our planet”, he added.

"[#COVID19 issues] cannot be solved by men alone without the insights of women.We urge you to push for agreed conclusions that highlight the agency of engaging and involving women."- @UN_Women ED @phumzileunwomen at the #SGTownHall with civil society during #CSW65. pic.twitter.com/W8jh9ATWWA

A litany of setbacks

The UN chief painted a devastating picture of the social and economic impact the COVID-19 pandemic has had on women’s rights, particularly the most vulnerable, marginalized and poorest.

He spoke about gender-based violence, both inside the home and online, as well as the repercussions of school closures and elder care in perpetuating inequalities, along with the inability of 12 million women to access sexual and reproductive health services.

“UNICEF reported last week that up to ten million more girls are at risk of becoming child brides as a result of the pandemic”, he said.

Moreover, there is a huge gender gap in the task forces and panels that are supposed to be building the recovery.

To ensure that everyone enjoys life, dignity and security on a healthy planet, he said there was a need to “reset” policies on the basis of the 2030 Agenda for Sustainable Development.

The UN chief stressed that “gender equality is a question of power”, and as such, “women’s full representation and leadership are a prerequisite” in moving forward.

“We need a more inclusive, networked multilateralism that recognizes the strength that comes through diversity. We cannot talk about inclusive multilateralism without including half the world’s population”, he spelled out.

In an effort to “reignite” the Decade of Action for the Sustainable Development Goals (SDGs), and chart a path to more equal, just, inclusive, sustainable societies and economies, the Secretary-General advocated for five “transformative actions” to build women’s representation, participation and leadership.

Crediting vaccines that “have been developed in record time”, Mr. Guterres said, “there are now signs of hope”.

But rather than going back to the previous “normal”, often discriminatory, unjust and unsustainable, he underscored the importance of moving towards a “safer, fairer, more inclusive and equal world”.

It is our pleasure to host the #SGTownhall &amp; connect with civil society members from around the world who are joining #CSW65. Through our collective efforts, we are closer to achieving gender equality. Thank you for being advocates for #GenerationEquality in your communities. pic.twitter.com/vfBURUMIhy

Hosting the event, UN Women Executive Director Phumzile Mlambo-Ngcuka echoed the UN chief in saying that COVID-19 “cannot be solved by men alone without the insights of women” and called for an “agreed conclusion that highlight the agency of engaging and involving women.”

She introduced Tumie Komanyane of Frontline AIDS, who zeroed-in on the issue of justice, which for many women living in sub-Saharan Africa, “remains a far-fetched reality”.

Ms. Komanyane asserted that reparations for violence against women and girls be a “key part of the COVID-19 response”.

“Although many of the countries have progressive legislation, implementation remains fraught with challenges, including poor resource allocation to response”, she said.

Nandini Tanya Lallmon, a social activist leader from Mauritius who spoke on behalf Women’s Rights and the LGBTI Caucus, detailed that “the near absence of lesbian, bisexual, transgender, intersex and gender non-conforming, women, girls and people from local councils, political parties, trade unions…have resulted in them facing barriers to access and exercise their rights”.

Ms. Lallmon underscored that “full and inclusive participation in public life” is a prerequisite for ensuring that the interests of every group are adequately represented.

Click here to watch the town hall in its entirety. 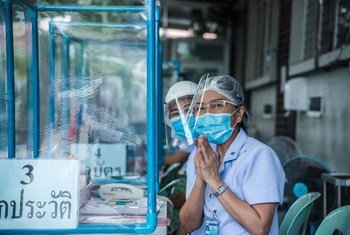