UNICEF/Bruno Amsellem/Divergence
A three-year-old child looks outside their home in Lyon, France, during a lockdown due to the coronavirus pandemic.

One year into the COVID-19 pandemic, progress has gone backward across virtually every key measure of childhood, the UN Children’s Fund (UNICEF) said on Thursday, revealing a “devastating and distorted new normal” for the world’s children.

“The number of children who are hungry, isolated, abused, anxious, living in poverty and forced into marriage has increased. At the same time, their access to education, socialization and essential services including health, nutrition and protection has decreased”, Henrietta Fore, UNICEF Executive Director, said.

“The signs that children will bear the scars of the pandemic for years to come are unmistakable.”

According to the latest data from UNICEF, children in developing countries have been particularly affected, with rates of child poverty there feared to rise by around 15 per cent and an additional 140 million children in these countries also projected to be in households living below the poverty line.

168 million schoolchildren globally missed out on almost a year of classes, and more than 1 in 3 of the schoolchildren were unable to access remote learning, while schools were closed.

A sharp rise is also feared in child marriages, with about 10 million additional girls at risk of being married before they turn 18, unravelling years of progress in reducing the horrendous practice, and robbing young girls of their childhood and threatening their lives and health.

Health indicators, including mental health, for children also suffered major setbacks, and hunger and malnutrition rose sharply. As of March, children accounted for 13 per cent of global COVID-19 infections in 107 countries surveyed (data under 20 years of age). Nearly 100 million children were at risk of missing vaccines due to paused measles campaigns in 26 countries (data as of November 2020).

Furthermore, over two-thirds of mental health services for children were disrupted globally, and at least 1 in 7 children and young people lived under stay-at-home policies for most the year, leading to feelings of anxiety, depression and isolation.

Refugees and asylum seekers, in some 59 countries with available data, faced additional challenges, unable to access COVID-19-related social protection support due to border closures and rising xenophobia and exclusion (data as of November 2020).

Keep children at ‘heart’ of recovery

UNICEF Executive Director Fore called on all countries and stakeholders to ensure children are “at the heart of recovery efforts”.

“This means prioritizing schools in reopening plans. It means providing social protection including cash transfers for families. And it means reaching the most vulnerable children with critical services”, she urged.

“Only then can we protect this generation from becoming a lost generation.” 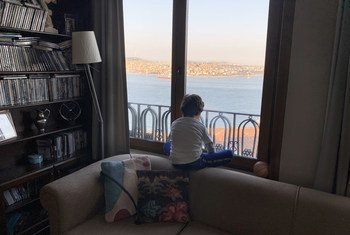