Vatican Media
Pope Francis (centre) releases a dove representing peace at the ruins of the Syriac Catholic Church of the Immaculate Conception in Mosul, Iraq.

Pope Francis’ historic visit to northern Iraq to hold prayers at an ancient church destroyed by ISIL “sends a clear message to the world that harmony and cohesion between the followers of all religions is the only way for the advancement and progress of humanity,” the top UN culture official has said.

After arriving in Iraq on Friday, Pope Francis travelled over the weekend to Mosul and holy sites within the country’s Christian heartland. On Sunday, according to media reports, the pontiff called for peace and prayed among ruined churches for the victims of the conflict with the Islamic State of Iraq and the Levant (ISIL), which left thousands of civilians dead.

Audrey Azoulay, Director-General of the UN Educational, Scientific and Cultural Organization (UNESCO), and Noura Al Kaabi, Minister of Culture and Youth of the United Arab Emirates, welcomed the historic papal visit to Al Tahera Church, one of the sites of the UNESCO-led Revive the Spirit of Mosul initiative.

Iconic symbol at the crossroads of cultures

Al-Tahera, built in 1859 and opened in 1862, is an iconic symbol woven into the history of Mosul. The Church is in the heart of the old city, formerly defined by the Ottoman city walls on the west bank of the Tigris River, opposite ancient Nineveh. Its multiple altars, dining room and two sacristy rooms set it aside from other churches of the same period.

This past December, when the restoration project got under way in earnest, UNESCO Representative to Iraq, Paolo Fontani, said that “the rehabilitation of this church is important not only because of its value as cultural heritage, but also as a testimony to the diversity of the city, a proud crossroads of cultures and a peaceful haven for different religious communities over the centuries.”

At that time, Minister Al Kaabi added that through the UAE’s restorative efforts with UNESCO, the aim was not only to rebuild various places of worship, but “also to empower Moslawi youth by creating job opportunities, providing vocational and technical training, and enhancing the capabilities of craftsmen in the field of preservation of cultural heritage.”

Harmony and cohesion between religions

In the joint statement issued on Saturday, Minister Al Kaabi and Ms. Azoulay described the Pope's visit to Al-Tahera Church as sending a clear message to the world that harmony and cohesion between the followers of all religions is the only way for the advancement and progress of humanity, and the most effective means by which to address the increasing challenges facing the world.

The Minister and Director-General stressed the importance of the Pope’s visit to the site of the project in spreading the message of peace and fraternity and highlighted the strength and resilience of humanity in countering the divisive message spread by the group responsible for destroying the Al Nouri Mosque, the Al Saa’a and Al Tahera Churches.

“The Pope’s visit to the project site was a source of inspiration to those engaged in the rehabilitation efforts and provides strong impetus to efforts aimed at establishing peace and harmony in Iraq, the region and the world,” they stated.

With up to 180 Iraqi academics killed, UNESCO calls for international protection

UNESCO chief condemns murder of yet another Iraqi journalist 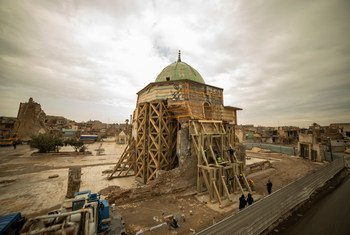 The visit by Pope Francis to the northern Iraqi city of Mosul at the weekend will be a symbol of hope and an opportunity to join forces for peace and unity, the UN cultural agency, UNESCO, said on Thursday, ahead of his touchdown in the capital, Baghdad.