UNFPA
Russian supermodel and philanthropist Natalia Vodianova has been appointed as Goodwill Ambassador for the United Nations sexual and reproductive health agency, UNFPA.

The UN’s sexual and reproductive health agency, UNFPA, on Wednesday appointed supermodel, philanthropist, and impact investor Natalia Vodianova as its newest Goodwill Ambassador, in an effort to empower women and girls, including fighting stigma surrounding menstruation.

“For too long, society’s approach to menstruation and women’s health has been defined by taboo and stigma”, said Ms. Vodianova, stressing that the situation “has undermined the most basic needs and rights of women.”

Today, we’re very excited to announce that supermodel and philanthropist @NataSupernova has been appointed as a @UNFPA Goodwill Ambassador 🧡Learn more and join us in welcoming her to the @UN family: https://t.co/6B9I2X2tb5 #StandUp4HumanRights pic.twitter.com/PuDYRiRDfy

In her new role with UNFPA, officially known as the UN Population Fund, Ms. Vodianova will seek to help culturally redefine menstruation, as a normal bodily function.

On any given day, more than 800 million women and girls aged 15 to 49 are actively menstruating. In many countries, taboos surrounding the cycle leaves girls vulnerable and can even be life-threatening, says UNFPA, as they are excluded from public life, denied opportunities, sanitation and basic health needs.

The agency said in a press release, that the issue has been starved of the attention it deserves, but in recent years that has started to change, and “achieving this, is central to UNFPA’s mandate”.

“It’s a tragic irony that something as universal as menstruation can make girls feel so isolated…We all have a role to play in breaking the taboos around menstruation”, said UNFPA Executive Director Natalia Kanem, underscoring the significance of spotlighting the damage caused.

She added that the agency “is pleased to partner with such a powerful and committed advocate. Societies prosper when girls are confident, empowered and making their own decisions!”

Building on past momentum

Over the past three years, Ms. Vodianova has teamed up with UNFPA to launch a series of “Let’s Talk” events worldwide, which have mobilised policy makers, civil society and the private sector to help tackle shame, exclusion and discrimination, faced routinely by millions of women and girls.

Leaders from various sectors such as fashion, politics, sport, technology and media have also gathered in Turkey, Kenya, Switzerland, Belarus and India to advance women’s health.

Raised in poverty by a single mother in Russia, along with caring for a half-sister who has cerebral palsy and autism, Ms.Vodianova is a passionate advocate for human rights, including reproductive rights and the rights of people living with disabilities, UNFPA noted.

The agency said it was looking forward to working with her in her role as a bridge builder across the fashion and technology industries, where she’s an influential international voice, to help achieve the Sustainable Development Goals by 2030. 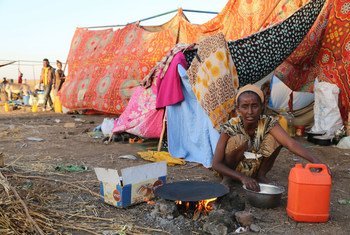 'We had to run for our lives’: The pregnant women fleeing Tigray

Pregnant women are amongst the tens of thousands of people in need of assistance in the Tigray region of Ethiopia, where fighting between the Government and regional forces of the Tigray People’s Liberation Front (TPLF) have been ongoing since November 2020. Hiwot* is one of them. 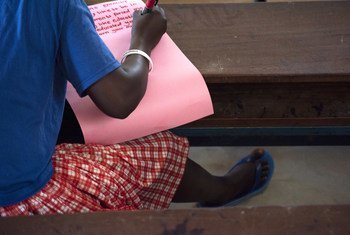 The United Nations has called for collaboration at all levels, and across all sectors of  society, to protect millions of girls and women at risk of female genital mutilation (FGM) every year.