Lucas Hilal
A woman waves a giant "All for Vaccines" flag in São Paulo's Sambadrome, Brazil.

The number of reported cases of COVID-19 globally has declined for the fifth consecutive week, the head of the UN health agency said on Monday, underscoring that “simple public health measures work, even in the presence of variants”.

Noting a nearly 50 per cent drop this year, he stressed that “how we respond to this trend” is what matters now.

Today, 2 versions of the AstraZeneca/Oxford #COVID19 vaccine are listed for emergency use, giving the green light for these vaccines to be rolled out globally through #COVAX. The vaccines are produced by AstraZeneca-SKBio 🇰🇷 & the Serum Institute of 🇮🇳👉https://t.co/5NHRcpGxhi pic.twitter.com/BvWM1mrH1S

While acknowledging that there is more reason for hope of bringing the pandemic under control, the WHO chief warned, “the fire is not out, but we have reduced its size”.

"If we stop fighting it on any front, it will come roaring back”.

‘All the pieces in place’

WHO gave the green light for two versions of the Oxford-AstraZeneca vaccine to be rolled out globally under an emergency listing, which assesses and assures the quality, safety and efficacy of COVID-19 vaccines and is also a distribution prerequisite under the UN-led vaccine initiative COVAX.

One of the vaccines was produced by SKBio in Korea, the other by the Serum Institute of India.

Following the Pfizer-BioNTech inoculations, these are the second and third vaccines to receive emergency use listing.

“We now have all the pieces in place for the rapid distribution of vaccines”, said Tedros.

However, he reiterated the need to scale-up production along with his call for vaccine developers to send their dossiers to WHO for review when they submit them to regulators in high-income countries.

Ensuring the rapid and equitable rollout of vaccines globally is essential for saving lives, stabilizing health systems, protecting livelihoods and steadying economies, according to the WHO chief.

“Fully funding COVAX represents the greatest possible stimulus and is a rounding error compared with the trillions of dollars that have been mobilized in G7 countries to support their economies’, he said.

The WHO chief looked forward to an upcoming meeting of the G7 industrialized countries on Friday to discuss vaccine equity.

And he underscored the need to continue building the demand for vaccines by ensuring people have the right information, recalling that a year ago, “we were not only fighting a pandemic, we were fighting an infodemic”.

The solution is to fight misinformation, delete false or misleading statements, listen to concerns and questions and provide answers with good information, Tedros upheld.

Drawing attention to last week’s spate of Ebola cases in Democratic Republic of the Congo, the WHO chief emphasized that having the right information is “essential in every outbreak situation”.

“Four cases have now been reported, and two people have died”, he updated, adding that yesterday, authorities in Guinea declared a separate Ebola outbreak in the town of Gouéké, in the country’s southeast.

“So far, three cases have been confirmed, among six people who reported Ebola like-symptoms after attending a funeral in late January”, he said. “Two have since died, while the other four are being treated in hospital”.

He informed the journalists that although both outbreaks are in hard-to-reach, insecure areas with mistrust of outsiders, WHO is working closely with health authorities to engage affected communities to enhance trust and acceptance in both countries.

While Ebola and COVID-19 are “two very different diseases”, Tedros said that “both thrive on misinformation and mistrust” and can both be stopped with proven public health measures, engaged communities, accurate information and vaccines. 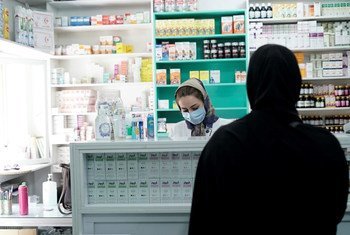 Amidst some positive news from the World Health Organization (WHO) that both COVID-19 deaths and new cases have recently been on the wane, there are “three major threats” to the UN-led international equitable vaccine initiative, COVAX, that require urgent attention. 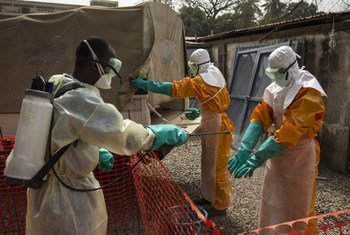