The UN Special Envoy on Myanmar appealed on Tuesday for the Security Council to unite in support of democracy in the country in the wake of the recent power grab by the military and the declaration of a one-year state of emergency.

I am deeply concerned that the military coup in #Myanmar could further exacerbate the problems of the most vulnerable, including #Rohingya Muslims. I condemn the coup once again and call for unrestricted humanitarian access to #Rakhine State and other parts of the country.

“More than ever, this Council’s unity is crucial”, she said, according to remarks shared afterwards.

“I strongly condemn the recent steps taken by the military and urge all of you to collectively send a clear signal in support of democracy in Myanmar.”

The crisis stems from elections held in November, marking the second democratic elections in Myanmar since the end of military rule a decade ago.

Ms. Suu Kyi’s party, the National League for Democracy (NLD), scored a landslide victory. The military and some political parties claimed the vote was fraudulent.

Myanmar’s Supreme Court was scheduled to pronounce this month on its jurisdiction over complaints of alleged election-related violations.

“We had earlier encouraged all electoral disputes should be resolved through established legal mechanisms”, Ms. Schraner Burgener said.  “There appeared to be a commitment on the part of the military to safeguard the rule of law. So, the turn of events was surprising and shocking.”

The UN envoy underlined the NLD’s victory at the polls.  The party won more than 82 per cent of seats, which “provided a strong renewed mandate to the NLD, reflecting the clear will of the people of Myanmar to continue on the hard-won path of democratic reform.”

She called for the state of emergency to be repealed and for the detained leaders to be released, while the post-electoral litigation process should resume “with full commitment from both sides”.

The military’s proposal to hold elections again should be discouraged, she added.

“It is important that we join our efforts in helping ensure the military respects the will of the people of Myanmar and adheres to democratic norms.”

Following reports of violence, including against journalists, Ms. Schraner Burgener also urged the Council to ensure the protection of civilians and human rights.

“We cannot allow a full backsliding since Myanmar opened up in 2011”, she warned, while expressing fears about the humanitarian consequences of the crisis as all flights, including UN relief flights, have been suspended through April.

The envoy also highlighted other aspects of the crisis, which could hamper efforts to address the situation of the country’s Rohingya community, who mainly live in Rakhine state in western Myanmar.

The mainly Muslim minority group has faced violent persecution at the hands of the military.  In 2017, more than 700,000 Rohingya fled to neighbouring Bangladesh following widespread attacks by the security forces.

“It is all too regretful that the hope of continued progress marked by the 8 November elections, including strengthened United Nations-Myanmar cooperation, has been jeopardized,” Ms. Schraner Burgener said.

“A smooth transition of power would have presented a key opportunity to advance action on priority issues including the Rohingya crisis, strengthening of the rule of law, and advancing national reconciliation and human rights protection for all of Myanmar’s diverse communities.”

The President of the UN General Assembly, Volkan Bozkir, has also called for the immediate release of the detained political leaders in Myanmar, adding that attempts to undermine democracy and rule of law are unacceptable.

“The President said this morning that he is deeply concerned that the military coup in Myanmar could further exacerbate the problems of the most vulnerable, including Rohingya Muslims,” his Spokesman, Brenden Varma, told journalists on Tuesday.

“He condemned the coup once again and called for unrestricted humanitarian access to Rakhine State and other parts of the country.”

Mr. Bozkir is also looking to schedule a briefing by the Special Envoy for all UN Member States, in line with a General Assembly resolution on the human rights of Rohingya Muslims and other minorities in Myanmar.

♦ Receive daily updates directly in your inbox - Subscribe here to a topic.
♦ Download the UN News app for your iOS or Android devices.
security council|Myanmar|human rights 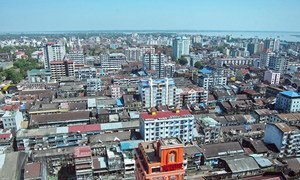