The UN Secretary-General, António Guterres, received his first dose of the COVID-19 vaccine on Thursday, at Adlai E. Stevenson High School in the Bronx, a few miles uptown from UN Headquarters in New York.

In a Tweet, Mr. Guterres expressed his gratitude and good fortune at receiving the jab, and urged the international community to ensure that vaccines becomes available to everyone, on an equitable basis. “With this pandemic, none of us are safe until all of us are safe”, he wrote.

"We must get to work to make sure the vaccine is available to everyone, everywhere. With this pandemic, none of us are safe until all of us are safe."-- @antonioguterres after getting his #COVID19 vaccine in NYC on Thursday. pic.twitter.com/LbuEmA2hfw

71-year-old Mr. Guterres was eligible to receive the vaccine on the basis of his age: New York residents over the age of 65 are included in the current phase of vaccinations in the city, which also includes school workers, first responders, public transit workers and grocery workers.

In December, Mr. Guterres declared that he would happily receive the vaccine in public, and said that, for him, vaccination is a moral obligation: “Each one of us provides a service to the whole community”, he said, “because there is no longer a risk of spreading the disease.”

Journalists and camera crews were invited to observe the UN chief receive his shot, which took place at a time when many countries are seeing a significant proportion of their citizens expressing “vaccine hesitancy”.

UN regional offices have noted a significant level of mistrust and, in some countries, including Japan and several European nations, around half the population are reportedly unsure about getting a COVID-19 vaccine at this stage.

Commenting on the UN chief’s vaccination appointment on behalf of the Mayor’s Office, Penny Abeywardena, Commissioner for International Affairs, said that she was heartened that the Secretary-General had secured his appointment online, and received the vaccine in a New York City public school, in the same manner as many other city residents.

“This will go a long way in building trust in our communities that the vaccine is safe for all”, she said.

UN Photo/Eskinder Debebe
UN Secretary-General António Guterres receives his COVID-19 vaccination at a school in The Bronx, New York.
♦ Receive daily updates directly in your inbox - Subscribe here to a topic.
♦ Download the UN News app for your iOS or Android devices.

The virus that shut down the world: the path to a vaccine 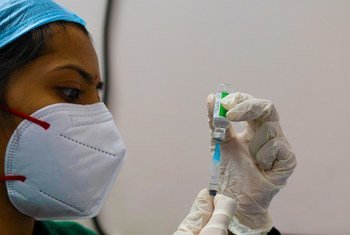 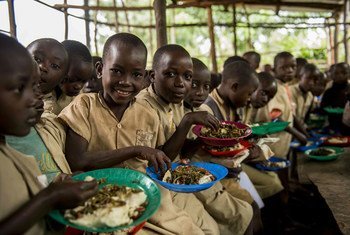 Although school feeding programmes are a lifeline for millions of boys and girls, nearly 40 billion in-school meals have been missed during the COVID-19 pandemic, according to a report published on Thursday by the UN Children’s Fund (UNICEF) Office of Research: Inocenti, and the World Food Programme (WFP).