UNICEF/Ricardo Franco
A man stands amidst debris after Tropical Cyclone Eloise barrelled through Mozambique, leaving massive destruction in its wake.

UN agencies are ramping up efforts on Tuesday to help communities in Mozambique hit hard by Tropical Cyclone Eloise, which barrelled through the country just three weeks after the devastating Tropical Storm Chalane.

Cyclone Eloise made landfall near Beira, a major city in Sofala province, central Mozambique, around 2 AM Saturday (local time) with high winds, heavy rains and severe flooding.  The city was in the eye of ferocious Cyclone Idai, which killed more than 600 people and left hundreds more injured, in 2019.

Preliminary figures indicate that at least six people died and 12 injured due to Cyclone Eloise, but the number may rise as more information becomes available. The storm also damaged more than 8,800 houses and at least 26 health centres, and disrupted power and communication links.

According to the UN Office for Coordination of Humanitarian Affairs (OCHA), more than 176,000 people – including up to 90,000 children – have been affected, with several thousand displaced. On ground and aerial assessments are ongoing.

“As humanitarian partners were already responding to multiple needs in Mozambique including the conflict in Cabo Delgado in the north and the recent impact of Tropical Storm Chalane, more resources are urgently needed to ensure we can scale up quickly to respond to Tropical Cyclone Eloise,” he said.

About 32 accommodation centres for the displaced have been set up in the heavily affected Sofala province, including in Beira city, providing temporary accommodation for around 15,000 families.

Churches, mosques and some Government offices are also housing the displaced, “many of whom fled with little more than the clothes on their backs”, Paul Dillon, a spokesperson for the UN International Organization for Migration (IOM) said at the same briefing.

He added that initial assessments indicated that over half of the 71 resettlement centres sheltering people displaced by the 2019 Cyclone Idai, are in areas affected by Cyclone Eloise.

“IOM staff are distributing soap and a limited supply of cloth face masks to the most vulnerable. They are also providing information on the need to maintain physical distancing, but it is very difficult under the current circumstances", Mr. Dillon said.

There are also serious concerns for chronic disease patients who lost their medications, he added, noting that the UN agency is monitoring the situation to refer these cases to health facilities, many of which have themselves been damaged.

In addition, the potential outbreak of waterborne diseases like diarrhoea and cholera is a major worry, especially among affected and displaced children.

UNICEF/Ricardo Franco
A person walks along a flooded street in Beira, central Mozambique, near the site where Tropical Cyclone Eloise made landfall on 23 January.

The months of January to March are the peak of lean season in Mozambique, when people struggle the most to find food, according to the UN World Food Programme (WFP) spokesperson Tomson Phiri.

Almost 3 million people – in both rural and urban areas – in southern, central and northern Mozambique were already facing high levels of food insecurity before the cyclone, he added. The storm also flooded large swathes of crop land, and destroyed farm tools and seeds, prompting fears for the annual harvest expected in April, as well as replanting beyond.

He went on to note that WFP has about 640 metric tons of food available at its warehouse in Beira, as part of its ongoing lean-season response, but it can be used to provide urgent, life-saving assistance in areas affected by the cyclone.

“However, more resources will be urgently needed so we can mount an adequate response in a timely manner”, Mr. Phiri added.

UNICEF/Ricardo Franco
A scene of destruction in the Praia Nova neighbourhood of Beira city, after Tropical Cyclone Eloise.

After passing over Mozambique, Tropical Cyclone Eloise went on to hit other countries in southern Africa.

Zimbabwe has been impacted by heavy rains, with reports of localized flooding and mudslides. There are also unconfirmed reports suggesting that some people have lost their lives. Heavy rainfall and flooding has also been reported in South Africa, and Botswana expects widespread rainfall in coming days.

Eswatini also witnessed heavy rains since 23 January and most rivers in the country are flooded. Several roads and bridges are reported to have been damaged.

#CycloneEloise🌀In Mozambique, over 163,000 people have been affected, including about 7,000 displaced, according to Government's preliminary data. The numbers are expected to rise.In Zimbabwe, heavy rains have caused floods, mudslides &amp; destruction.➡https://t.co/boTcYsg5YJ pic.twitter.com/4DeplHbtYf 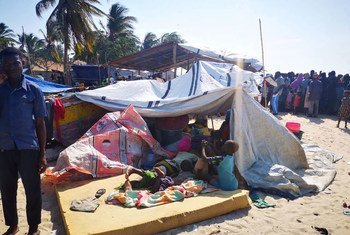 UN agencies voiced deep concern on Wednesday over the worsening humanitarian crisis in Mozambique’s Cabo Delgado province, where attacks by armed groups have forced more than 565,000 to flee their homes.