CIFOR/Nkumi Mtimgwa
Workers pick tea in Tanzania. Changes in the climate have affected crops such as tea, across the world.
14 January 2021
Climate and Environment

Though countries have made progress in planning for climate change adaptation, there are significant financing shortfalls in getting them to the stage where they provide real protection against droughts, floods and rising sea levels, a new UN environment report has found.

According to the 2020 Adaptation Gap Report, released on Thursday by the UN Environment Programme (UNEP), as temperatures rise and climate change impacts intensify, nations must urgently step up action to adapt to the new climate reality or face serious costs, damages and losses.

It's time to close the #AdaptationGap.

Nations must urgently step up action to adapt to the new climate reality or face serious costs, damages and losses.

Our new report on the challenges and the way forward⬇️ https://t.co/OdGwIhoryB

“The hard truth is that climate change is upon us,” Inger Andersen, UNEP Executive Director, said in a news release announcing the findings.

“Its impacts will intensify and hit vulnerable countries and communities the hardest, even if we meet the Paris Agreement goals of holding global warming this century to well below 2 degrees Celsius and pursuing 1.5 degree Celsius.”

Annual adaptation costs in developing countries are estimated at $70 billion, but the figure could reach up to $300 billion in 2030, and $500 billion in 2050. Almost three-quarters of nations have some adaptation plans in place, but financing and implementation fall “far short” of what is needed, according to the UNEP report.

Stepping up public and private finance for adaptation is, therefore, urgently needed.

“As the Secretary-General has said, we need a global commitment to put half of all global climate finance towards adaptation in the next year … this will allow a huge step up in adaptation, in everything from early warning systems to resilient water resources to nature-based solutions,” Ms. Andersen added.

Adaptation is a key pillar of the Paris Agreement on Climate Change. It aims to reduce countries’ and communities’ vulnerability to climate change by increasing their ability to absorb impacts. 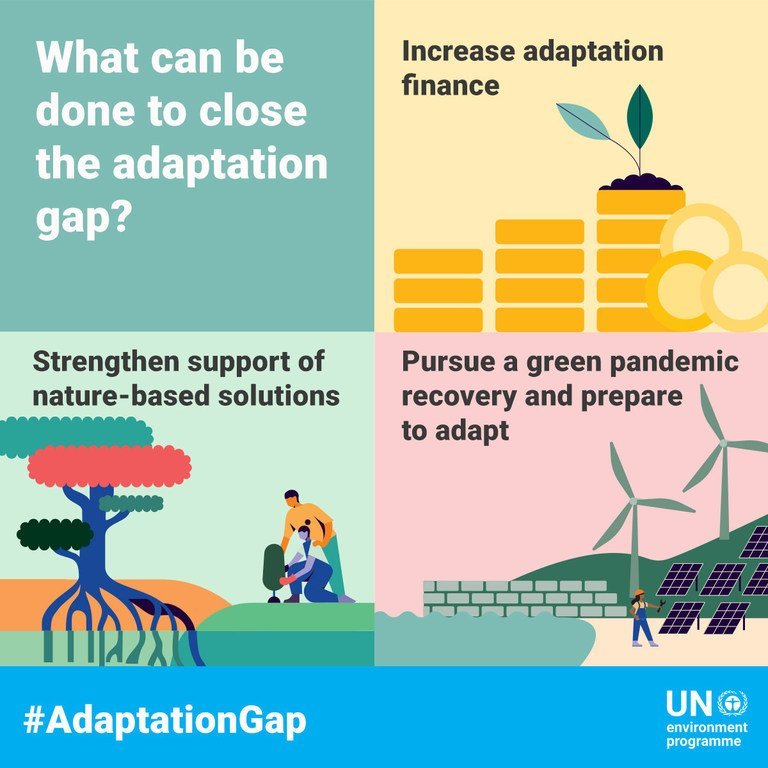 The UNEP report also underscored the importance of nature-based solutions as low-cost options that reduce climate risks, restore and protect biodiversity, and bring benefits for communities and economies.

Its analysis of four major climate and development funds: the Global Environment Facility (GEF), the Green Climate Fund (GCF), the Adaptation Fund, and the International Climate Initiative (IKI), suggested that support for green initiatives with some element of nature-based solutions has risen over the last two decades.

Cumulative investment for climate change mitigation and adaptation projects under the four funds stands at $94 billion. However, only $12 billion was spent on nature-based solutions, a tiny fraction of total adaptation and conservation finance, it added.

Cutting greenhouse gas emissions will reduce the impacts and costs associated with climate change, according to the report. Achieving the 2 degrees Celsius target of the Paris Agreement could limit losses in annual growth to up to 1.6 per cent, compared to 2.2 per cent for the 3 degrees Celsius trajectory.

UNEP urged all nations to pursue the efforts outlined in its December 2020 Emissions Gap Report, which called for a green pandemic recovery and updated Nationally Determined Contributions (NDCs) that include new net-zero commitments.

“However, the world must also plan for, finance and implement climate change adaptation to support those nations least responsible for climate change but most at risk,” the UN agency added.

“While the COVID-19 pandemic is expected to hit the ability of countries to adapt to climate change, investing in adaptation is a sound economic decision,” it said.

♦ Receive daily updates directly in your inbox - Subscribe here to a topic.
♦ Download the UN News app for your iOS or Android devices.
climate action|environment

8 reasons not to give up hope - and take climate action

Despite a brief dip in global carbon dioxide emissions as a result of the coronavirus pandemic, the planet is still heading for a global temperature rise in excess of 3 degrees Celsius this century, a new United Nations report has revealed.