Addressing world leaders at the One Planet Summit, Secretary-General António Guterres outlined the consequences of abusing Earth and its resources.

As we rebuild, we cannot revert to the old normal.

Pandemic recovery is our chance to change course.

With smart policies and the right investments, we can chart a path that brings health to all, revives economies and builds resilience - @antonioguterres #OnePlanetSummit pic.twitter.com/bdX0HxZIKV

“We have been poisoning air, land and water – and filling oceans with plastics. Now, nature is striking back: temperatures are reaching record highs, biodiversity is collapsing, deserts are spreading, [and] fires, floods and hurricanes are more frequent and extreme,” he said.

Combined with the devastating effects of COVID-19 and its socio-economic fallout, the UN chief reminded everyone that “as we rebuild, we cannot revert to the old normal.”

“Pandemic recovery is our chance to change course. With smart policies and the right investments, we can chart a path that brings health to all, revives economies and builds resilience and rescues biodiversity”, he highlighted.

‘Everyone must do much more’

The Secretary-General noted that innovations and nature-based solutions are especially promising, and that preserving biodiversity also creates jobs. According to the World Economic Forum, emerging business opportunities across nature could create 191 million jobs by 2030, he added.

At the same time, with a financing gap of $711 billion per year until 2030 to meet global biodiversity targets, increased and sustained financing will be crucial to transition away from polluting sectors, Mr. Guterres said.

“The time has come to…align public and private financial flows with the Paris Agreement commitments and the Sustainable Development Goals (SDGs) and integrate the goal of carbon neutrality into all economic and fiscal decisions.”

The UN chief also urged support for the most vulnerable, who are already suffering the effects of climate change, such as the least developed countries and small island developing States.

“Everyone must do much more … We begin a new year under the sign of hope. Together, let us seize the opportunity to build a safer, fairer and more sustainable world,” he added.

Organized by the French Government in partnership with the United Nations and the World Bank, the One Planet Summit brought together world leaders to commit action to protect and restore bio-diversity. Due to the coronavirus outbreak, the event was largely virtual.

Opening the Summit, French President Emmanuel Macron, declared that protecting and restoring biodiversity is “in our interest”.

Alongside creating millions of jobs between now and 2030, the natural world offers many benefits, he said, adding that intact forests and ocean ecosystems can help meet climate targets by acting as carbon sinks.

“Nature offers solutions for developing sustainable agriculture, for economic and financial services, helping us to preserve our heritages and cultures”, said the French President.

Also on Monday, the Great Green Wall for the Sahel and Sahara, an initiative to combat desertification in the vast region, received a pledge of more than $14.2 billion in new funding over the next 10 years, to restore degrading land, protect biodiversity and strengthen resilience.

According to the UN Convention on Combating Desertification Secretariat (UNCCD), overall, about $33 billion needed by the initiative to achieve its ambitious targets to restore 100 million hectares of degraded land, the soil capture of around 250 million tons of atmospheric carbon, and creation of some 10 million green jobs for communities, by 2030.

Mohamed Cheikh El-Ghazouani, President of Mauritania and the Chair of Conference of Heads of State and Government of the Pan African Agency for the Green Great Wall, welcomed the announcement.

“The mobilization of this additional funding through an innovative approach will certainly contribute to the achievement of the Great Green Wall goals”, he said.

Since its inception in 2007, the country-led Great Green Wall programme has planted billions of trees and supported tens of thousands of local households. Its path snakes along the southern margin of Africa’s Sahara Desert running from the Atlantic coast to the Red Sea.

♦ Receive daily updates directly in your inbox - Subscribe here to a topic.
♦ Download the UN News app for your iOS or Android devices.
climate action|biodiversity 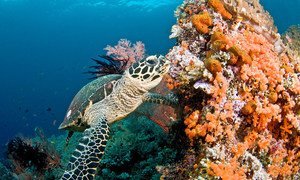 Every one of the world’s coral reefs could bleach by the end of the century, unless there are drastic reductions in greenhouse-gas emissions, the United Nations Environment Programme (UNEP) has warned. 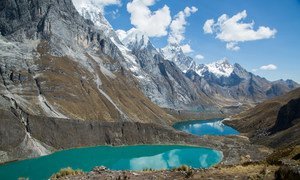 Although many of the world’s most important crops and livestock species originate in mountain regions, hunger is rising in these areas due to biodiversity loss and climate change, according to a joint study published on Friday by the UN Food and Agriculture Organization (FAO) and partners.