Unsplash/Random Institute
Concerns have been voiced about the deteriorating human rights situation in Uganda ahead of elections.
8 January 2021
Human Rights

The UN human rights office, OHCHR, is urging authorities in Uganda to ensure elections next week are free and peaceful, noting that the arrest of opposition candidates and their supporters are among several “worrying” developments ahead of the vote.

“We are deeply concerned by the deteriorating human rights situation in Uganda ahead of parliamentary and presidential elections scheduled for 14 January and the challenges this situation may pose not only for voting day itself, but also for the post-electoral period,” Spokesperson Ravina Shamdasani said on Friday.

#Uganda: We are deeply concerned by the deteriorating human rights situation ahead of elections. We call on the authorities to protect #HumanRights, and to ensure a free & peaceful election process, incl. by taking measures to prevent electoral violence 👉 https://t.co/iYYa5c5K8G pic.twitter.com/cz7TlYgtEg

Eleven candidates are vying to unseat President Yoweri Museveni, who has been in power for the past 35 years.  The contenders include reggae singer and opposition leader Bobi Wine, whose real name is Robert Kyagulanyi.

OHCHR said numerous rights violations have been reported in the run-up to the elections, including cases of arbitrary arrest and detention, and torture.

At least 55 people were killed between 18 and 20 November during riots and protests over the arrest and detention of Mr. Kyagulanyi, leader of the National Unity Platform (NUP), and Patrick Oboi Amuriat, candidate for the Forum for Democratic Change (FDC).

“Indeed, the harassment, ill-treatment, arbitrary arrests and detention of opposition candidates and supporters have been a worrying development during the electoral campaign”, Ms. Shamdasani said.

She added that Mr. Kyagulanyi has repeatedly been blocked from holding campaign events, while Mr. Oboi Amuriat was arrested on the campaign trail last Saturday and released on bail that afternoon. Security forces reportedly beat journalists covering the event.

The UN human rights office also voiced concern over COVID-19 restrictions implemented in relation to the elections, including fears that they are being used to curtail political participation.

Last June, the Electoral Commission of Uganda issued rules for low-contact elections, or “scientific elections”, which prohibit mass rallies and provide for digital campaigns. They were later revised to allow campaign meetings with up to 200 people.

In December, the Commission suspended general election meetings in 16 districts characterized as having high transmission of the virus.

Ms. Shamdasani said although human rights law may allow for restrictions to mass gatherings and campaigning for public health reasons, “we have increasingly observed that the COVID-19 restrictions have been enforced more strictly to curtail opposition electoral campaign activities in a discriminatory fashion.”

“At their court appearance, some presented injuries resulting, according to them, from torture during detention.   In contrast, police have not enforced COVID-19 restrictions in such a strict manner for electoral campaign activities by the ruling party,” she said.

“Such developments increase concern that the COVID-19 measures are being used as a ground to restrict public freedoms and political participation during the electoral process.  We are also concerned that the discriminatory enforcement of such restrictions has led to violence, arbitrary arrests and detention, and, in some instances, reports of torture and ill-treatment by security forces.”

♦ Receive daily updates directly in your inbox - Subscribe here to a topic.
♦ Download the UN News app for your iOS or Android devices.
Uganda|COVID-19 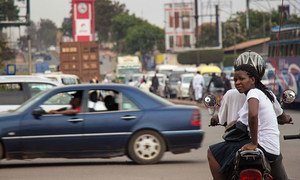