The killing of civilians in separate car bomb attacks in northern Syria on Saturday has been condemned by top UN humanitarian officials for the country.

The first blast occurred in Ras al-Ain, when a car bomb exploded in a market area on a main road, killing two children and injuring their mother and several others.  At least three shops were also damaged.

The second incident took place near a bakery in Jinderis, located in northwest rural Aleppo.  One person was reportedly killed, while two children were among the casualties.

“This year, civilians in Syria will have endured ten years of crisis. These two attacks so early in the new year serve as a tragic reminder of the price civilians across the country continue to pay,” it said.

Mr. Riza and Mr. Hadi expressed their profound condolences to the families of the victims and those affected by the attacks.

They also reminded parties to the conflict to respect their obligations to take all precautions to protect civilians, in line with international humanitarian law and human rights law. 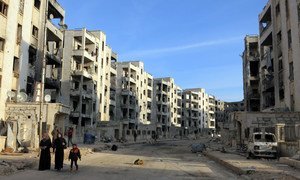 “Identified gaps, inconsistencies and discrepancies” that remain unresolved, have brought into question the true extent of the elimination of chemical weapons during Syria’s bloody conflict, the UN disarmament chief told the Security Council in her briefing on Tuesday.