IMO/Pankaj Gautham
400,000 seafarers are still at sea even though their contracts have ended.

Hundreds of thousands of seafarers have been on board for many months longer than planned, stranded at sea due to COVID-19 travel restrictions. Six months after the problem was first revealed, many of them are still struggling to cope with the ongoing uncertainty.

Throughout the year, the maritime transport industry has managed stay afloat, allowing food, medicine and other essential goods to be transported across the world, to stock the shelves even during the strictest lockdowns.

However, many seafarers were forced to stay at sea for several months longer than planned, sometimes for over a year: as 2020 comes to a close, the UN maritime agency (IMO), estimates that some 400,000 seafarers, from all over the world, are still on their ships, even though their contracts have ended, unable to be repatriated. Another 400,000 are thought to be stuck at home due to the restrictions, unable to join ships and provide for their families.

IMO/Matt Forster
Chief Engineer, Matt Forster, was unable to travel home once his contract had ended due to COVID-19-related travel restrictions.

The mental health of seafarers has been sorely tested, as Matt Forster, an English Chief Engineer, based mainly on an oil tanker in the Middle East and Asia, told UN News in July. His contract was well overdue at the time, and he was having difficulty coping with the separation from his two small children.

"I’ve done long contracts before, but this is different", he said. "It has a psychological effect, as there is no end in sight. It affects family life a lot more. My children are always asking me when I am coming home. It’s difficult to explain to them".

Mr. Forster is now back in England, reunited with his children, but his experience has made him think twice about his choice of career. "We wanted to go to work, do our bit, and then come home. We didn’t sign up for what felt like an unwanted prison sentence", he says.

"I don’t want to go back if I am going to get stuck again for another six months. And it’s not just me: a lot of other seafarers around the world feel the same way. It’s going to cause people to leave the industry."

We have rights as human beings

IMO
The IMO has called on governments to designate seafarers as essential workers.

The plight of seafarers this year has been described by IMO as an infringement of human rights. Speaking on Human Rights Day, in December, the head of the agency, Kitack Lim, paid tribute to maritime "frontline workers", and invited countries to ensure that their rights to safe and decent work conditions are recognized, respected and protected.

Hedi Marzougui, an American captain, echoed Mr. Lim’s calls, and expressed his concerns about the mental health strain exerted on crews by the extended period on board.

"The longer you stay out there, the more fatigued you get physically. The hours, weeks and months start to add up, you get very tired, and you are not as sharp," he said, adding that exhaustion can lead to accidents.

"We also have rights as human beings, we have families of our own. We have a life to get back to", added Captain Marzougui. "We're not robots, we shouldn't be seen as second-class citizens". 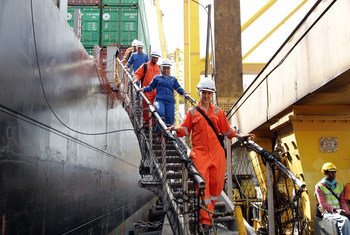 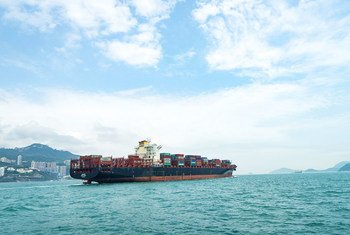 Hundreds of thousands of seafarers are finding themselves stranded at sea, sometimes for over a year, and with no end in sight, as a result of COVID-19 travel restrictions. The uncertainty and long spells away from home are taking a heavy mental toll.