IOM 2020/Ervin Causevic
A migrant at what remains of the Lipa Emergency Tent Camp in northern Bosnia and Herzegovina, after it was destroyed in a fire.
28 December 2020
Migrants and Refugees

United Nations agencies and humanitarian partners have called on authorities in Bosnia and Herzegovina to act urgently to help hundreds of migrants, stranded and without shelter, amid freezing winter temperatures.

The migrants and asylum seekers lost shelter after the Lipa Emergency Tent Camp, located in the country’s north-west, was closed and subsequently destroyed in a fire on 23 December.

Lipa location in #Bihac #BiH has become a winter prison. #Migrants are not allowed to leave site, and are now making fires inside the remaining tents to keep warm. We have seen a few days ago how quickly fire can spread. This is a totally unnecessary tragedy. @UNmigration @UN_BiH pic.twitter.com/KOeHrOmYMf

“With the recent heavy snowfalls and temperatures below freezing, up to 500 people currently stranded at the location of the former Lipa camp are at immediate safety, health and protection risk,” the UN International Organization for Migration (IOM) and the Office of the UN High Commissioner for Refugees (UNHCR) said in a joint statement on Saturday.

“With no heating at the site, frostbite, hypothermia and other severe health problems are already being reported by those stranded at the location. Despite the efforts of humanitarian actors to provide emergency assistance, their lives are at immediate risk,” they added.

The UN agencies were joined by humanitarian NGOs Danish Refugee Council, Medecins Du Monde, and Save the Children.

Not prepared for harsh winter

The Lipa camp was built earlier this year in response to over-crowding and unsuitable conditions elsewhere. It was never “winterized”, a process that generally includes adding thermal floor mats and insulation to shelters, as well as distributing blankets, heating stoves and fuel, to strengthen resilience.

Humanitarian agencies had been alerting on the risks migrants and asylum seekers would be exposed to unless adequate shelter solutions were identified, underlining the unsustainability of the camp during the cold months, according to the statement.

“Despite our collective best efforts and readiness to immediately support any viable alternative, no solution, temporarily or otherwise, was proposed by the authorities until now,” the UN agencies and partners said.

According to Peter Van der Auweraert, IOM Chief of Mission in the country, migrants at the destroyed camp are resorting to makeshift efforts, such as lighting fires inside the remaining tents to keep warm, raising the risk of another catastrophe.

“We have seen a few days ago how quickly fire can spread. This is a totally unnecessary tragedy,” he said.

IOM 2020/Ervin Causevic
Migrants walking at what remains of the Lipa Emergency Tent Camp in northern Bosnia and Herzegovina, after it was destroyed in a fire.

In the statement, the UN agencies and partners recognized the delicate situation the authorities are facing with the closure of the camp, and called for an immediate alternative solution.

“It is up to the authorities to provide minimum protection for those stranded outside reception centers in deteriorating winter conditions,” they said, noting that in addition to those stranded at the Lipa location, there are about 2,000 others, “forced to try and survive in abandoned buildings and make-shift camps.”

“Failing to act with the utmost urgency will put lives at risk.”

The agencies and partners also reiterated their readiness to support the authorities’ efforts in finding safe and protective alternative solutions, and to urgently organize provision of assistance.

♦ Receive daily updates directly in your inbox - Subscribe here to a topic.
♦ Download the UN News app for your iOS or Android devices.
migrants|BOSNIA AND HERZEGOVINA 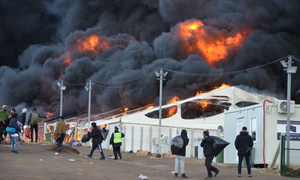 The closure and subsequent fire, on Wednesday, at a migrant camp in Bosnia and Herzegovina has left thousands of migrants without shelter and protection, amid plummeting winter temperatures, the UN International Organization for Migration (IOM) has reported.