Just days before elections in the Central African Republic (CAR), an uptick in armed violence is threatening the safety of civilians and their right to vote, according to the UN human rights office.

“We are deeply alarmed by reports of escalating violence stoked by political grievances and hate speech, resulting in the forced displacement of civilians, including to neighbouring countries”, Liz Throssell, a Geneva-based spokesperson for the Office of the UN High Commissioner for Human Rights (OHCHR), said in statement on Wednesday.

Instability in CAR dates back decades, and violence has displaced hundreds of thousands in the country, which despite immense natural mineral wealth, is one of the poorest in the world.

🇨🇫 We are deeply alarmed by reports of escalating violence in #CentralAfricanRepublic stoked by political grievances and #HateSpeech and remind all parties that the protection of civilians is paramount.Learn more: https://t.co/f58145YTSq pic.twitter.com/VzaXuept9W

With elections gearing up for 27 December, Ms. Throssell said that there have been “numerous reports of attacks against security forces, political candidates and election officials”.

Reportedly, clashes between armed groups and security forces have taken place across a wide area, including neighbourhoods close to the capital, Bangui.

“The UN Human Rights Office joins UN Secretary-General António Guterres in calling for all parties in the Central African Republic to put an end to the violence”, she said.

The OHCHR spokesperson reminded all parties, “including security forces and armed groups, as well as international and foreign forces”, that “they are bound to respect international humanitarian law and human rights law as applicable”.

“The protection of civilians is paramount”, she spelled out.

The UN Deputy Special Representative and Humanitarian Coordinator for CAR, Denise Brown, pushed back on unfounded rumours that armed groups had been marching on the capital, in an interview with UN News on Monday, here:

The OHCHR official reminded the signatories to the political agreement of February 2019, which includes political actors and armed groups, to abide by their commitment to respect human rights and not resort to violence to resolve disputes.

And she said that neighbouring countries, the African Union, and the Economic Community of Central African States (ECCAS) have “a central role to play” in ensuring a peaceful resolution of the pre-election crisis and contributing towards protecting the civilian population of CAR.

Earlier this week, the G5, which includes the World Bank, European Union (EU), United States and Russia, called for the immediate and unconditional end to “coordinated offensives” on the part of armed groups and agitators, and scaremongering that is threatening the electoral process.

They condemned all efforts to “force the country into a new political transition” in violation of the constitution and called on former President Francois Bozize and unnamed armed elements to ‘lay down their weapons immediately”.

The group firmly condemned “all collusion between political actors and armed groups looking to create disorder and panic among the population” in a bid to deny them “their sovereign right to vote”.

The protection of civilians is paramount -- OHCHR

Vote will go on

To date, more than 1.8 million citizens have registered to vote and voting cards have been distributed throughout the country ahead of Sunday’s poll, according to the G5.

UN Special Representative Mankeur Ndiaye, who also heads the UN Multidimensional Integrated Stabilization Mission in the country (MINUSCA), reassured citizens over the weekend that UN peacekeepers would do their utmost to ensure the security of the electoral process and encouraged the people not to panic.

The UN and its partners in the country have issued a strong message to armed groups and insist that the national poll will go ahead as planned. 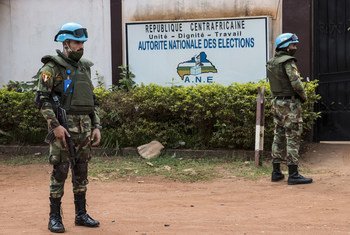 With a week to go until elections are scheduled to take place in the Central African Republic (CAR), the UN is concerned about an escalation of armed attacks, amid reports that armed groups have taken control of towns near the capital, Bangui. 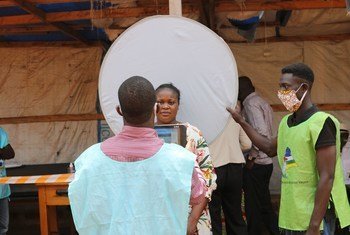 The UN Secretary-General has called for parties in the Central African Republic (CAR) to prioritize national dialogue and consensus-building ahead of elections scheduled to begin in December.