China has mounted a "shocking" five-year assault on lawyers who stand up for human rights, putting them in prison and even torturing them, an expert mandated by the UN Human Rights Council said in a statement on Wednesday.

Mary Lawlor, the Special Rapporteur on the situation of human rights defenders, said lawyers in China continue to be “charged, detained, disappeared and tortured”, five years on from a law enacted as an apparent national security measure.

“Since the so-called ‘709 crackdown’ began on 9 July 2015, the profession of human rights lawyer has been effectively criminalised in China,” Ms. Lawlor said in the statement.

She added that although she respected and appreciated the importance of safeguarding national security, governments should not exercise their right to do so at the cost of human rights and the lives and livelihoods of citizens. There was an inherent contradiction in targeting lawyers under the pretext of protecting the rule of law, the statement said.

Lawlor said the case of Chang Weiping, a human rights defender and lawyer who was arrested and disappeared on suspicion of “subversion of state power” for 10 days, epitomised China’s efforts to silence lawyers who spoke out about human rights.

Mr. Chang’s whereabouts are unknown after he made a video message complaining about his treatment, saying he had suffered torture and ill-treatment when security officials subjected him to “residential surveillance at a designated location” (RSDL), leaving him with physical and psychological after-effects. He was later returned to RSDL because of his complaint.

“In a shocking display of disregard for human rights, the authorities have re-arrested a human rights defender for courageously sharing his experience and denouncing human rights violations, and attempted to portray him as a threat to national security,” Ms. Lawlor said.

His lawyers have been unable to contact Mr. Chang and no charges have been brought against him, the statement said.

“The fact that the lawyers initially hired by Mr. Weiping’s family to represent him have both withdrawn from his case due to pressure they received from officials is also telling of the gravity and scale of the situation faced by human rights defenders and lawyers in China”, Ms. Lawlor added.

She said lawyers who have been detained and released during the crackdown reportedly faced “security measures” in the run-up to Human Rights Day on 10 December, and human rights lawyers’ families had been harassed, threatened, summoned for questioning and subjected to surveillance by the authorities. The had also been affected by the loss of household income.

“Fundamental human rights are not a threat to any Government or society, and neither are the individuals who defend those rights. I urge the Chinese authorities to release at once Chang Weiping and all other detained and disappeared human rights defenders.”

Ms. Lawlor’s statement was supported by two other Special Rapporteurs and the UN Working Group on Enforced or Involuntary Disappearances. 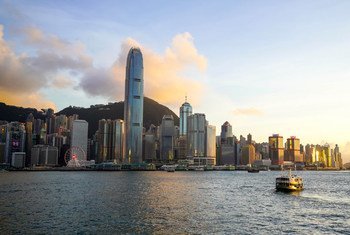 The UN human rights office, OHCHR, has expressed alarm at the arrest of demonstrators in Hong Kong, following China’s adoption of a national security law for the Special Administrative Region (SAR).