Unsplash/Jeromey Balderrama
UN human rights experts expressed concerns about charges against an indigenous leader who protested at Mount Rushmore in the US.

Nicholas Tilsen, human rights defender of the Oglala-Lakȟóta Sioux Nation and president of the indigenous-led NDN Collective, is due in court on 18 December, charged with four felonies and three misdemeanours after he and others blocked a road leading to a fireworks celebration event, led by President Donald Trump, which was held on 4 July at the South Dakota site in the Black Hills region.

“Obviously we cannot pre-judge the outcome of the case against Nicholas Tilsen, but we are seriously concerned about his arrest and the charges brought against him in connection with the exercise of his rights as an indigenous person, particularly the right to assembly”, the five UN Special Rapporteurs said.

The independent experts called on the US “to ensure that Mr. Tilsen’s due process rights are respected during the criminal prosecution and recall the obligation to ensure equal protection of the law without discrimination”.

They also voiced alarm over “allegations of excessive use of force by law enforcement agents against indigenous defenders, and recent reports of surveillance and intimidation by local police officers following the arrests”.

The 38-year-old was one of 15 peaceful protesters arrested in connection with the political rally – organized without the consent of the indigenous peoples concerned – to celebrate US Independence Day.

Rushmore hosts colossal sculptures of former presidents carved into the side of the mountain.

“I’ve worked hard to make a better way for our people. These trumped-up charges aren’t just against me, they’re against our people…designed to derail our movements. But we stand on the right side of history and we know our ancestors stand with us”, Mr. Tilsen tweeted in August.

Mr. Trump’s rally in South Dakota, one of the states worst hit by the COVID-19 pandemic, was held without the consent of the Great Sioux Nation.

It attracted some 7,500 people who did not wear masks or practice social distancing, according to a news release from the UN human rights office (OHCHR).

“It is absolutely essential that the authorities do more to support and protect indigenous communities that have been disproportionately affected by the COVID-19 pandemic”, the experts stressed.

“We also call on authorities to initiate dialogue with the Great Sioux Nation for the resolution of treaty violations”. 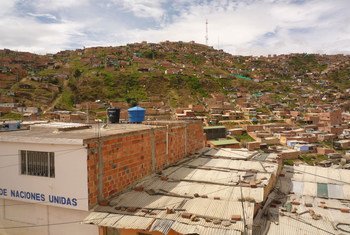