The UN High Commissioner for Refugees has challenged world leaders to put him “out of a job” by addressing the root causes that drive millions to flee their homes due to war and insecurity.

In a message commemorating the 70th anniversary of the UN refugee agency (UNHCR), High Commissioner Filippo Grandi called on the international community “to build a world in which there is truly no need for a UN refugee agency because nobody is compelled to flee.”

1950-2020: UNHCR turns 70 today. We are proud of our work but with the number of refugees and displaced rising every year, this is not a birthday to be celebrated. I launch a challenge to world leaders — help us put an end to forced displacement, and get out of business. pic.twitter.com/mO4ZJbYRTn

“Don’t get me wrong: as matters stand, our work is crucial”, he continued, “yet the paradox is that we ought not to exist. If we find ourselves observing many more birthdays, the only conclusion will be that the international community has failed.”

This week marks the 70th anniversary of the decision by the UN General Assembly to establish the Office of the High Commissioner for Refugees, to assist millions of Europeans who fled or lost their homes during the Second World War.

Originally a time-limited mandate, UNHCR’s work has continued to expand, with crises globally forcing people to flee for safety and protection.

“Today’s conflicts cross borders and reverberate across entire regions. The climate crisis is taking hold. Extreme poverty and hunger are increasing; violence against women and girls is widespread,” he said.

“And now the COVID-19 pandemic is having a devastating impact on the most vulnerable, including women, men and children forced from their homes.”

Mr. Guterres, himself a former UN High Commissioner for Refugees, called for greater international cooperation to tackle the challenges.

“I urge all countries to renew their commitment to the Global Compact [on Refugees]; to recognize their responsibilities to refugees and the countries that host them; and to find durable solutions based on solidarity, human rights and human dignity”, he said.

As of the end of 2019, there were 79.5 million people – about 1 per cent of the global population – forcibly displaced. Among them nearly 26 million are refugees and about 45 million internally displaced.

There are also millions of stateless people, who have been denied a nationality and lack access to basic rights such as education, health care, employment and freedom of movement.

With about 17,300 staff members – nearly 90 per cent are in the field in 135 countries – UNHCR works to help the displaced in a wide range of areas, including legal protection, administration, community services, public affairs and health.

Mr. Grandi highlighted the non-political nature of his mandate, codified in its statute.

“We are not usually ‘in the room’ when the fates of nations and peoples are decided. But we are certainly on the ground, assisting people who are forced to flee when those disputes are left unresolved”, he said in the message.

Mr. Grandi applauded UNHCR staff for their work and taking pride in rising to new challenges, adding that at the same time, they didn’t have to do it.

“If warring parties would agree ceasefires, if displaced people could return home safely, if governments shared the responsibility of resettlement, if states would keep to their obligations under international law regarding asylum and the principle of non-refoulement … then we would have much less to worry about”, he said. 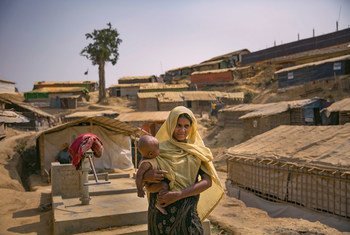