Critical decisions made now to address the COVID-19 pandemic will lead to a life of dignity for all people, UN Deputy Secretary-General Amina Mohammed said on Friday, addressing the second and final day of the General Assembly’s special session devoted to the crisis.

Heads of UN agencies, along with scientists and other stakeholders, are holding interactive dialogues focused on the health and humanitarian response, the road to vaccines, and addressing the socio-economic impacts of the crisis.

Since the onset of the #COVID19 pandemic, the @UN System has pulled together in support of the most vulnerable. Very encouraged by the engaging conversation from heads of @UN entities and partners. We need clear results to support those in need. #UNGASS. pic.twitter.com/y9HZ2ly7pv

Ms. Mohammed outlined UN support to countries going forward, including mobilizing the $28 billion needed to secure vaccines for all, regardless of wealth or location, and assisting authorities everywhere to operationalize inclusive recovery plans.

“This session comes at a critical moment. If we make the right decisions now, we can meet the humanitarian needs, reset the development pathways, accelerate implementation of the Sustainable Development Goals, and secure a life of dignity and opportunity for all on a safe and a healthy planet”, she said.

The General Assembly is often described as “the global town hall”, bringing together all 193 UN Member States.  "We cannot neglect our duties to the people we serve at this time of crisis, when it is even more important," Assembly President Volkan Bozkir said in his opening address.

COVID-19 has affected the entire planet and, by extension, every area of the UN’s work.  Although the pandemic is a global health crisis, impacts have varied across countries, as has response.

While many countries have been able to prevent or contain the virus through proven public health measures, “this is not a fluke of geography or demography”, according to the head of the World Health Organization (WHO), who delivered a speech from its Headquarters in Geneva.

WHO Director-General Tedros Adhanom Ghebreyesus said these nations have proved the efficacy of “science, solidarity and sacrifice”, paraphrasing a motto he has used throughout the pandemic.

“But where science is drowned out by conspiracy theories, where solidarity is undermined by division, where sacrifice is substituted with self-interest, the virus thrives. The virus spreads”, he stated.

Globally, more than 64 million cases of COVID-19 have been recorded, with nearly 1.5 million deaths.  Even with vaccines on the horizon, “we are still in a very, very dangerous and difficult situation”, said WHO’s Director of Emergencies, Dr. Michael Ryan, speaking from Geneva during the first dialogue.

He explained that some countries, particularly in the Americas and Europe, are still experiencing major virus transmission. Although the situation in other regions may be stable, some of their countries still battle continued or returning transmission.

As the UN Secretary-General has remarked, the pandemic has been the greatest challenge to the global community since the Organization was founded 75 years ago.  But it has also sparked international action that includes recovery plans and economic stimulus packages, according to David Beasley, Executive Director of the World Food Programme (WFP).

However, he warned that next year “is literally going to be catastrophic”, as humanitarian needs double, with famine “already knocking on the door” of some 12 nations. As war drives hunger, fighting also must cease, he added.

“We can avert destabilization and famine and migration. But we’ve got to be out there sooner rather than later” said Mr. Beasley, urging countries to step up.

“If we’re strategic, and put the funds to these particular icebergs before us, I believe that we can get through 2021, while we work with the vaccines and rebuild the economies so that we can have a better world and achieve Zero-Hunger by 2030.”

The Zero-Hunger target is among the 17 Sustainable Development Goals (SDGs) which all 193 UN Member States adopted five years ago. The SDGs provide a blueprint for ending poverty, protecting the planet and ensuring all people live in peace and prosperity.

The goals remain “absolutely relevant” because “they are our compass for getting out of this crisis”, said Achim Steiner, Administrator at the UN Development Programme (UNDP).

Among the lessons UNDP learned from the pandemic has been the importance of having good data, critical for targeting people in need, particularly in times of crisis, while issues related to human rights and gender are now part of recovery plans.

Mr. Steiner underlined the importance of the UN’s work in responding to the socio-economic fallout from the pandemic, which has disproportionately affected women and the poor.

He warned that more than one billion people could be living in extreme poverty by the end of the decade “if we do not manage to make the right choices now”, according to a UNDP-backed study issued this week.

“But actually, the opposite is equally possible,” he countered.  “This is the moment. It is a generational moment in which we need to think about the future of development in very different ways.”

Scientists optimistic about COVID-19 vaccines for all 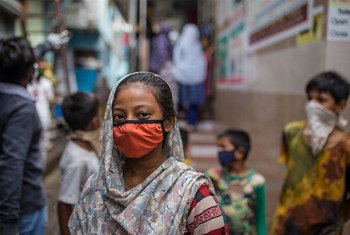 Nations united on Thursday for a special session of the UN General Assembly to survey the wreckage of the COVID-19 pandemic, reflect on the best response, and forge a path to better days ahead.