© UNICEF/Dhiraj Singh
Children wait outside a community toilet in a urban slum in Mumbai, India.

Nations united on Thursday for a special session of the UN General Assembly to survey the wreckage of the COVID-19 pandemic, reflect on the best response, and forge a path to better days ahead.

“Today marks an overdue and much needed moment of reckoning. None of us could have imagined, this time last year, what was to come”, said Assembly President Volkan Bozkir, speaking at the opening of the two-day gathering.

We are working for you. For the healthcare workers, who continue to work tirelessly on the frontline. For the people battling the effects of the COVID-19 disease.And for the families around the world, who are grieving the loss of their loved ones.#UNGASS. pic.twitter.com/FPmmqBvfm4

“The world is looking to the UN for leadership, to step up and take demonstrable action to address the greatest challenge our world is facing today. This crisis compels us to shake up how things are done, to be bold, and to restore confidence and trust in the United Nations.”

COVID-19 is first and foremost, a health crisis. Nearly 64 million cases have been recorded as of Thursday, including more than 1.4 million deaths, according to data from the World Health Organization (WHO).

While disrupting lives, the pandemic has also decimated livelihoods. With the global economy in decline and millions of jobs lost, extreme poverty is expected to rise and global efforts towards achieving the Sustainable Development Goals (SDGs) are at risk.

Although the entire planet is facing this common threat, UN Secretary-General António Guterres pointed out that it is the most vulnerable, such as the poor, older people, and women and girls, who have been hit hardest.

However, he said some of this fallout is not due to the pandemic alone, but the result of long-standing fragilities, inequalities and injustices which the crisis has only exposed.

“It is time to reset”, said the UN chief.  “As we build a strong recovery, we must seize the opportunity for change.”

Since the pandemic was declared in March, the UN system has been supporting countries in averting its worst impacts while also working to promote a strong recovery, including through delivering medical equipment and supplies to more than 170 nations.

“I have repeatedly called for a COVID-19 vaccine to be a global public good available to everyone, everywhere”, said the Secretary-General.  However, he added that a global mechanism which would make this possible remains underfunded.

Equitable access to vaccines is integral to effective pandemic response, said Azerbaijan’s President, Ilham Aliyev, speaking on behalf of the 120 countries of the Non-Aligned Movement.

“As many vaccines against COVID-19 are being currently studied, we are all looking forward to the successful outcome of clinical trials and hope that a safe and effective vaccine will soon be available, and that they will be considered as global public goods ensuring their universal distribution at affordable prices for all”, President Aliyev said in a pre-recorded video message.

Beyond health, the Secretary-General has also appealed for a global ceasefire during the pandemic, while also calling for peace within the home, to counter the rise of violence against women and girls.

Support to developing countries is another key area for response. The President of the UN Economic and Social Council (ECOSOC), Munir Akram, reported that more than 60 of these nations need “urgent financial help”, while five countries have defaulted on their debt payments.

“If there is an economic collapse or a humanitarian disaster in the developing countries, it will halt a global economic recovery, and the achievement of the SDGs will turn into a chimera”, he warned.

Looking beyond the pandemic, the Secretary-General said recovery must address the pre-existing conditions it has exposed and exploited. “We cannot bequeath a broken planet and huge debts to future generations. The money we spend on recovery must go into building a greener, fairer future”, he said.

Mr. Bozkir, the General Assembly President, expressed the feelings of millions worldwide, dreaming of the day the pandemic is declared over.  “The day we can take a deep breath of fresh air without fear. The day we can shake the hands of our colleagues, embrace our families, and laugh with our friends.”

Nine months into the crisis, he acknowledged that it would be easy to feel frustrated, but the veteran diplomat urged people everywhere not to be deterred.

“The UN is working for you. We are united, for you,” he said. “Stay strong. There are brighter days ahead."

Scientists optimistic about COVID-19 vaccines for all 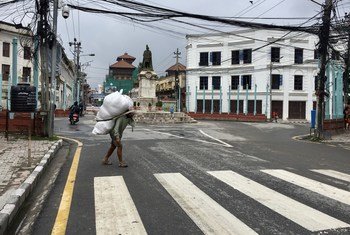 An additional 207 million people could be pushed into extreme poverty by 2030, due to the severe longterm impact of the coronavirus pandemic, bringing the total number to more than a billion, a new study from the UN Development Programme (UNDP) has found.