© UNICEF/Josh Estey
Only in exceptional circumstances and with incontrovertible evidence of intentional murder does international law permit the death penalty. (file)

UN independent human rights experts expressed serious concern on Thursday, after the United States Government rescheduled the execution of Lisa Montgomery for 12 January, just days before new President Joe Biden, an opponent of the death penalty, is due to be sworn in.

The group of 10 rights experts, have written to the Government calling for clemency, amidst concerns that she received inadequate legal assistance at the time of her trial in 2007, and that previous trauma and mental health issues were not satisfactorily put before the jury.

She was convicted of murder, under a federal offence of “kidnapping resulting in death”, according to news reports, and her death sentence was upheld by a judge in April 2008.

“Ms. Montgomery was the victim of an extreme level of physical and sexual abuse throughout her life against which the State never provided protection and for which it failed to offer remedies”, they elaborated. “She suffered from several mental health conditions which the State failed to care for”.

They continued to say that when it came to the capital proceedings, “the State betrayed her yet again, neglecting to consider these essential and determining facts as mitigating circumstances”.

#USA: UN experts call for clemency for #LisaMontgomery who is scheduled to be executed in January 2021. Serious concerns that she received inadequate legal assistance and her previous trauma &amp; mental health were not adequately considered.Read: https://t.co/rWKj5PQlt1#SaveLisa pic.twitter.com/Xrkbra7aaF

A news release from UN human rights office OHCHR, details the harsh upbringing endured by Ms. Montgomery, noting that she was the victim of horrific life-long cruelty that began when she was 11, when she was subjected to multiple rapes,  and later forced into prostitution, aged 15.

When she later married, the now 49-year-old woman was subjected to further abuse, some of which was captured on video. She had four children before being pressured into sterilization surgery.

By the age of 34 she had moved 61 times. And, because of the traumas she experienced, developed several severe mental health conditions for which she had no access to treatment.

“The failure to consider Ms. Montgomery’s personal history and traumatic experiences is especially egregious, given that the authorities had reportedly missed several opportunities to intervene and end her abuse”, the experts said.

During her childhood, a police officer, a judge and a school administrator were either informed of or suspected that she was being sexually abused, yet no action was taken to help Ms. Montgomery.

In 2004, shortly before Ms. Montgomery killed a pregnant woman, cut the baby from her stomach and pretended the child was her own, her former partner had threatened to take custody of her children.

Ms. Montgomery had falsely told her new partner that she was pregnant.

At her trial, according to the OHCHR release, the inmate’s attorney read a poem about rape rather than producing expert testimony on the decades of sexual and physical abuse she had endured, her mental disorders and their link to her trauma and crime.

“Shamefully, Ms. Montgomery’s years of sexual abuse and State’s neglect were further compounded by the gender discrimination she faced, pervasive at all stages of the capital proceedings against her”, the independent experts upheld.

They also pointed out that the incarcerated grandmother has accepted responsibility for her crime, expressed deep remorse, and maintained a connection with her children.

Last October, Ms. Montgomery was scheduled to be executed on 8 December but because her lawyers contracted COVID-19, they were unable to file for clemency within the time limit.

She was, therefore, granted a stay of execution until 31 December, giving the attorneys additional time to file a clemency petition.

On 23 November, the Government rescheduled the federal execution for 12 January.

“International standards are clear – the death penalty is always arbitrary and unlawful when the court ignores or discounts essential facts that may have significantly influenced a capital defendant’s motivations, situation and conduct. Such facts include exposure to domestic violence and other abuse. A death sentence carried out in contravention of a Government’s international obligations amounts to an arbitrary execution,” the experts warned.

Independent experts are appointed by the Geneva-based UN Human Rights Council to examine and report back on a specific human rights theme or a country situation. The experts are not UN staff, nor are they paid for their work.

US pardons Blackwater guards: An ‘affront to justice’ – UN experts 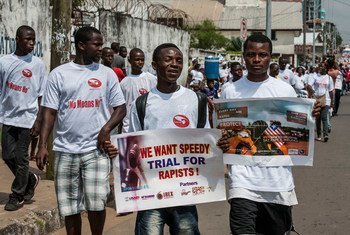