UN News/Laura Quiñones
The Jökulsárlón Glacier Lagoon in Iceland is formed naturally from melted glacial water and is perpetually growing while big blocks of ice crumble from a shrinking glacier.
2 December 2020
Climate and Environment

This year is on track to be one of the three hottest on record, completing a run of six years that were all hotter than any year ever measured before, the World Meteorological Organization (WMO) said on Wednesday.

The relentless rise of carbon dioxide levels in the atmosphere – a phenomenon that has continued despite a travel lull during the pandemic – will fuel temperature rise for decades to come.

🔶 Warmest 6 years have all been since 2015#ClimateAction pic.twitter.com/8GCmSYNpja

The 1.5 degree threshold represents a milestone the world is trying not to reach: the 2015 Paris Agreement on climate change, backed by almost every country on earth, calls for keeping the global temperature to 1.5°C above pre-industrial era levels.

To slow temperature rises, the world needs radical action. Countries must decrease production of fossil fuels by 6 per cent per year between 2020 and 2030 if the world is to avert "catastrophic” global temperature rise, according to the UN-backed Production Gap Report released on Wednesday.

In a landmark speech in New York on Wednesday, UN Secretary-General António Guterres said the fight against the climate crisis was the top priority for the 21st Century.

Climate records have fallen like dominos in the past decade, so notching up merely the third hottest year on record may seem to suggest some respite. But that would be a false conclusion, because 2020’s heat rose in a year when the world was experiencing a La Niña weather pattern, which normally means lower temperatures.

“Record warm years have usually coincided with a strong El Niño event, as was the case in 2016. We are now experiencing a La Niña, which has a cooling effect on global temperatures, but has not been sufficient to put a brake on this year’s heat. Despite the current La Niña conditions, this year has already shown near record heat comparable to the previous record of 2016,” said Prof. Taalas.

“We saw new extreme temperatures on land, sea and especially in the Arctic. Wildfires consumed vast areas in Australia, Siberia, the US West Coast and South America, sending plumes of smoke circumnavigating the globe”, he added.

“We saw a record number of hurricanes in the Atlantic, including unprecedented back-to-back category 4 hurricanes in Central America in November. Flooding in parts of Africa and South East Asia led to massive population displacement and undermined food security for millions.”

The 2020 temperature report is provisional until a final report is published in March 2021, the WMO said. 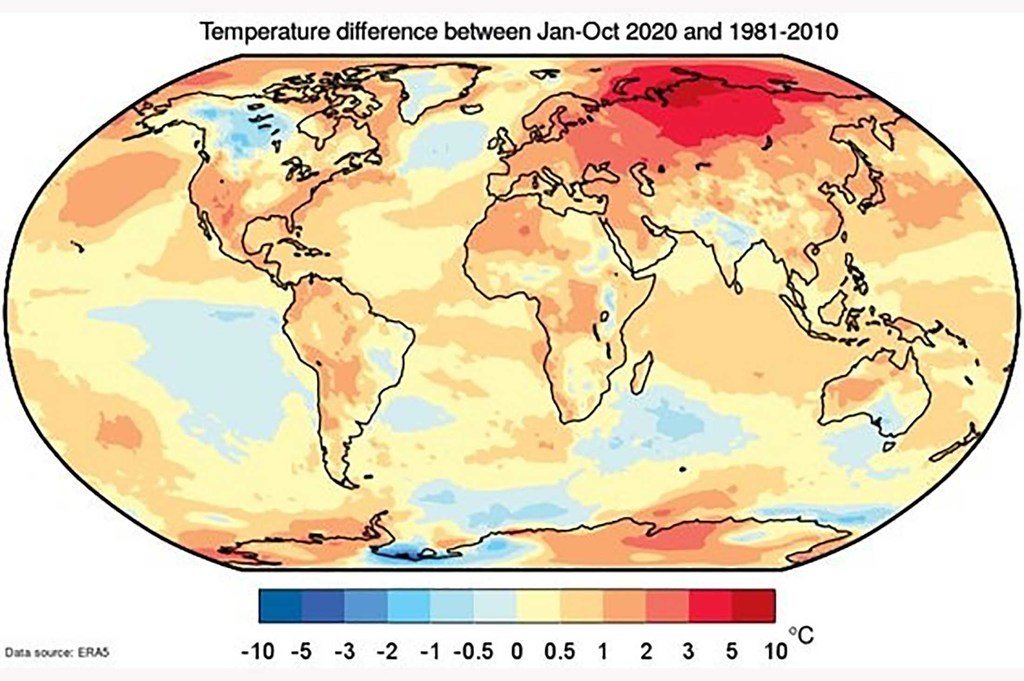 Source : ERAS
Temperature anomalies from the 1981-2010 long-term average based on ECMWF ERA5 reanalysis for the period January-October 2020
♦ Receive daily updates directly in your inbox - Subscribe here to a topic.
♦ Download the UN News app for your iOS or Android devices.
global warming|climate action

Countries must decrease production of fossil fuels by 6 per cent per year, between 2020 and 2030, if the world is to avert "catastrophic” global temperature rise, a new UN-backed report has found.