UN Photo/Evan Schneider
Auschwitz-Birkenau, a Nazi concentration camp in Poland, where over a million Jews and members of other minorities perished during the Second World War.

Although the United Nations turned 75 this year, the milestone would be incomplete without recognition of the huge losses endured during the Second World War: the event which led to the creation of the global Organization, UN Secretary-General António Guterres told ambassadors attending a commemorative ceremony in the General Assembly Hall on Tuesday.

The UN chief recalled the millions of lives lost on the battlefield and in the Holocaust, and the millions of victims of genocide, mass starvation, disease, massacres and aerial bombardment.

“It is our collective duty to remember them and to bear witness to their lives and deaths as we vow: Never again”, he said.

Consign ‘mindless bloodletting’ to the past

The Secretary-General stated that millions worldwide look to the UN to bring unity and coherence to global efforts for peace and human rights, and to deliver on the promise of a sustainable future for all.

“We cannot let them down. Nor can we forget those who died in the Second World War. We owe it to them to learn the lessons of history”, he said.  “All our efforts must be aimed at consigning such mindless bloodletting to the past.”

The Second World War, which lasted from 1939-1945, led to the formation of the UN and its pledge “to save succeeding generations from the scourge of war”, as outlined in the UN Charter, the Organization’s founding document.

Mr. Guterres said the Charter dared to imagine a world where people practice tolerance and live together in peace, and placed prevention and the peaceful resolution of disputes at the heart of this vision.

He added that the Charter also set out tools, such as  negotiation, arbitration and judicial settlement, which have been effective in preventing another catastrophic global war.

“For the first time in history, 75 years have passed without a military confrontation between major powers”, he said.  “United Nations peacemaking and peacekeeping have helped end conflicts and supported reconciliation in countries across the world.”

UN Photo/Mitsugu Kishida
Hiroshima, shortly after a nuclear bomb was dropped on this city in August 1945.

Falling short of the promise

Yet despite global progress during this time, including the adoption of treaties and conventions to address disarmament, the laws of war, and various rights, for example, the UN chief lamented that the world still falls short on achieving the promise of the Charter.

He listed challenges such as the climate crisis, which is creating “dramatic and new threats” to global peace and security.  Meanwhile, inequalities are growing and democratic space is shrinking.

“Human rights are under assault. Digital technology, including the exponential spread of disinformation, is dividing us further”, he continued, adding “and this year, the COVID-19 pandemic has demonstrated the serious limitations of global preparedness, cooperation and solidarity.”

While the long-term impacts of the pandemic are still unfolding, the crisis has already caused deep social and economic upheaval.  Poverty is on the rise and progress in gender equality has been set back by decades, among other fallouts.

In response to the pandemic, the Secretary-General issued two ceasefire appeals: one urging warring parties to stop fighting and instead focus on battling the virus, and the other to address the “shadow pandemic” of rising violence against women and girls.

“I appeal again for concrete commitments”, he said.  “All efforts towards peace require the full, equal and meaningful participation of women. There can be no sustainable peace when half the population is excluded.” 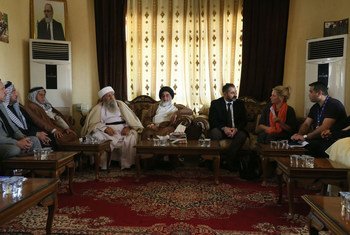 When Member States signed the United Nations Charter 75 years ago, it was to prevent more existential conflicts and save succeeding generations from a third world war. Conflict prevention is part of the Organization’s DNA and remains a central priority today, a guiding principle behind the UN Secretary-General’s current call for a global ceasefire during the coronavirus pandemic.