UN Samoa
A group of men in Samoa take part in activities to mark the International Day for the Elimination of Violence Against Women.

Although much progress has been made in highlighting the pressing issue of violence against women and girls, UN Secretary-General António Guterres is pushing the world to go further towards ending what he has characterized as a blight on all societies.

The UN chief issued the call for action during an online event held on Wednesday to commemorate the International Day for the Elimination of Violence against Women and to launch the annual 16 Days of Activism Against Gender-based Violence campaign, headed up by UN Women.

Stop teaching girls that when a boy is mean to her, it means he likes her.Stop teaching boys that being a man means asserting power.#orangetheworld #16Days #GenerationEquality pic.twitter.com/zHPphm1wO8

“Millions of women are being pushed further into poverty by the COVID-19 crisis, and all forms of violence against them are rising”, he said.  “In this context, the global community must continue to build on the momentum we have created to prioritize the voices, experiences and needs of women and girls.”

Back in April, the Secretary-General urged governments to make prevention and redress of violence a key part of their national responses to the pandemic.  More than 140 countries have responded.

Mr. Guterres relaunched the appeal on Thursday to show how greater efforts are needed, for example, for funding and ensuring access to essential services, but also to reduce the risk of violence occurring in the first place.

“This includes providing financial and material support to women and households; encouraging positive messaging around gender equality, stereotypes and norms; supporting access to mental health services; and engaging key stakeholders, including women and girls, men and boys, and traditional and faith-based leaders”, he said.

Prior to COVID-19, violence against women was already one of the most widespread violations of human rights, according to UN Women, which supports countries in achieving gender equality.

It can take many forms: from rape and domestic violence, to sexual harassment and cyber bullying, but also harmful practices such as female genital mutilation and child marriage.  One in three women worldwide has been affected.

UN Women said there has been an alarming upsurge in incidents during COVID-19, a veritable “shadow pandemic”, with some countries reporting a five-fold rise in calls to helplines in the first weeks of coronavirus outbreak.

Projections further show that for every three months of lockdown, an additional 15 million women are expected to be affected.

"Our collective and accelerated response to the Secretary-General’s call to make prevention and redress of violence against women a key part of national responses to COVID-19 will lead us to a safer, more equal and violence-free world for all women and girls," said Phumzile Mlambo-Ngcuka, UN Women's Executive Director.

"Together, we must uphold our commitment to: fund women’s rights organizations; respond by strengthening and adapting services to survivors and integrating responses to violence against women into COVID-19 response and recovery plans; prevent violence against women and girls through social mobilization and social protection measures; and collect data to inform policies and programmes."

‘We must do better’

For the Executive Director of the UN Population Fund (UNFPA), Dr. Natalia Kanem, there is only one word for these violations: Enough.

“We must do better,” she said. “It is time to stand up and say enough to violence not just on one day, but 365 days a year. We must prevent violence. And until we end it, we must provide everything women and girls need to survive and recover, from physical and mental health care to legal aid and support for regaining livelihoods.”

As a Goodwill Ambassador for UN Women, she has travelled the world to meet with survivors and hear their stories, which are sometimes heartbreaking and horrifying.

Everyone has a role

“The women themselves would remind us, and me, that this is a problem with a solution.  But the solution can only exist if we provide help,” she said in a video message.

“To play your role in ending violence against women, we need you to learn about the issue, make your friends and your community aware of services and resources, ensure that you know who to call if someone was is in danger, volunteer your time if you can, or if you have the means, donate.”

In the lead-up to the Gender Equality Forum next year, UN Women has launched its 16 Days of Activism global mobilization campaign to demand that the post-pandemic reset leads to a “new normal”, where violence against women and girls is relegated to history.

Governments, civil society, young people, influencers and others will be raising their voices during the campaign, which runs through 10 December.

UN Deputy Secretary-General Amina Mohammed is also turning over her Twitter account during this period to feature advocates, activists and everyday citizens working on the issue.

United Nations
♦ Receive daily updates directly in your inbox - Subscribe here to a topic.
♦ Download the UN News app for your iOS or Android devices. 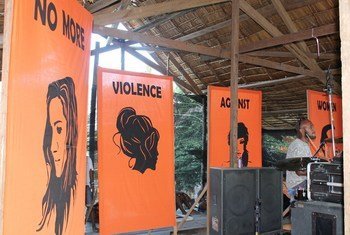 Commemorating the International Day for the Elimination of Violence against Women on Wednesday, the United Nations has called on governments worldwide to redouble efforts and eradicate gender-based violence forever.