© UNHCR/Hazim Elhag
Insecurity in the Tigray region of Ethiopia is driving people into Hamdayet in Sudan.

In a briefing to journalists on Thursday, a senior UN humanitarian official in Sudan recounted moving testimony from refugees who are crossing the border from Ethiopia in their thousands, fleeing fighting in Tigray province.

"Many of the refugees left behind children, and parents. They did not have time to assemble their families and leave together", said Babacar Cissé, the UN Resident and Humanitarian Coordinator in Sudan. "They arrived at the camps after having walked for several days, exhausted and with nothing. Seeing families and children sleeping in the open was heartbreaking".

Many of the refugees are young men, who told UN staff that they had been targeted by armed fighters. One man told Mr. Cissé that he had walked for two days, and had seen two family members killed. Another, a medical doctor, said that he had been forced to leave his family behind: he is now treating other refugees in the camp.

Response plan by the weekend

With the influx of refugees higher than expected, the UN in the region is planning for the arrival of some 200,000 over the next six months, said Mr. Cissé.

The UN, donors, and local authorities, are working closely on a response plan, which should be finalized by this weekend, he added. In the meantime, enough food to support 60,000 people for one month is being prepared for delivery from Kassala in the coming days.

"This crisis started on 7 November. After a week, we had about 20,000 and now over 30,000 refugees", Mr. Cisse explained. "People were in reception centres for registration before being relocated in refugee camps. They are not supposed to stay there for more than two days and we are committed to immediately addressing this urgent challenge."

Mr. Cissé was speaking following his return from a two day mission – along with the country representatives of the UN refugee agency (UNHCR), World Food Programme (WFP), UN Childrens’ Fund (UNICEF) and UN Population Fund (UNFPA) – to assess the situation in refugee camps in the southeastern region of Sudan.

So far, the largest number of refugees are entering Sudan at the small town of Hamdayet. During the two-day mission, the UN officials, and Sudanese authorities, visited the Hamdayet Reception Centre, where an emergency response has been set up to register and provide assistance to thousands of women, children and men crossing into the country.

The main concern centres around hygiene, as more and more people arrive. At their arrival in the camp, refugees can access clean water and soap, and receive hot meals and high-energy food supplies. More latrines are being built, and WFP has delivered supplies such as cooking pots, tank loads of water, and a mobile storage unit.

Tigray is Ethiopia’s third most-affected region in terms of COVID-19, and there is concern surrounding the movement of people and the risk this entails for the spread of pandemic.

Mr. Cissé warned that refugees are arriving at the camps without any masks or other forms of protection against the virus. Masks are being distributed in the camps but, as of now, there is no capacity for testing.

The most urgent needs are food, clean water, and shelter. The UN and partners are providing health and nutrition services, as well as hygiene and other non-food kits, and are working non-stop to address the needs of the population.

This includes supporting pregnant women, those who are breastfeeding, traumatized children and others who immediately need psychosocial assistance.

‘Keep children out of harm’s way’

Also on Thursday, UNICEF underscored the growing risks children on both sides of the border – the child refugees sheltering in Sudan, and the children inside Ethiopia’s Tigray region.

Henrietta Fore, Executive Director of UNICEF, said that conditions for refugee children are “extremely harsh” and that the UN agency is working to urgently provide critical life-saving support, including health, nutrition, water, sanitation and hygiene services.

Every effort should be made to keep children out of harm’s way, and to ensure that they are protected from recruitment and use in the conflict – UNICEF chief Henrietta Fore

Inside Ethiopia’s Tigray region, “restricted access and the ongoing communication blackout have left an estimated 2.3 million children in need of humanitarian assistance and out of reach,” she added.

“I am concerned that, without sustained humanitarian access, many more children will be at risk as malnutrition treatment supplies in the region will last only until December,” warned Ms. Fore.

She called on all parties to the conflict to allow urgent, unimpeded and sustained humanitarian access to all affected communities, underscoring that “every effort” be made to keep children out of harm’s way, and to ensure that they are protected from sexual and gender-based violence, as well as from recruitment and use in the conflict. 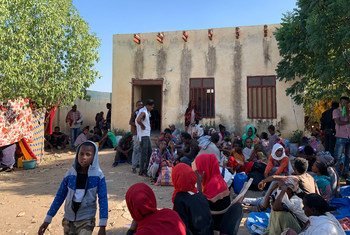 Senior UN officials have conducted a two-day mission to southeastern Sudan, where some 30,000 Ethiopians have found refuge after fleeing ongoing fighting between national and regional forces in Tigray province, the world body reported on Wednesday. 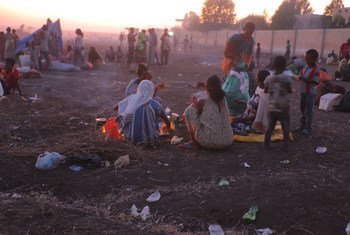 A “full-scale humanitarian crisis” is unfolding as thousands of refugees flee ongoing fighting in Ethiopia’s Tigray region each day to seek safety in eastern Sudan, the UN refugee agency (UNHCR) reported on Tuesday.