Despite the COVID-19 pandemic, Under-Secretary-General for Peace Operations Jean-Pierre Lacroix noted that counterterrorism efforts in the region have “actually intensified”.

“We welcome the increased coordination of security players on the ground…for a more visible presence of defence and security forces in the region as well as stepped-up pressure on terrorist groups”, he said in his virtual briefing on the Joint Force of the Group of Five (G5) Sahel nations, namely Burkina Faso, Chad, Mali, Mauritania and Niger.

As an essential compliment to peacebuilding efforts, Mr. Lacroix urged that the Joint Force’s police component be strengthened to improve military oversight as well as to support institution-building, prison reform and the “human rights compliance framework”.

He also underlined that the operational and logistical support of the UN stabilization mission in Mali (MINUSMA) for the Joint Force remains “critical”, particularly what he referred to as “life support consumables”, which have “proven essential”, especially during the rainy season.

However, the UN official highlighted the need for more “predictable funding” for the G5 Force to ensure that its robust counter-terror operations can continue without interruption.

“The G5 Sahel Joint Force plays a critical role in the regional response to violent extremism”, he attested, “It is essential that it receives the assistance it requires to carry out its mandated tasks”.

Mindful of the disastrous implications that an inadequately addressed security situation in the Sahel may have on West Africa, the UN peacekeeping chief pointed out that “despite encouraging progress” made by the Joint Force, “much more remains to be done”.

“As calls for the mobilization of additional resources to support the G5 Sahel’s fight against terrorism continue, so do calls for increased mobilization to tackle poverty and the unprecedented humanitarian crisis that the region currently faces”, he asserted.

“Strengthening the Joint Force is indeed only one aspect of the international community’s support”.

Speaking on behalf of the G5 States, the Ambassador of Mali, Issa Konfourou,

highlighted the need for “good governance” and stressed that the regional heads of State remain committed to supporting and conducting counter-terror operations with full regard for human rights.

He also cited “positive trends” regarding “better coordination of military operations” within and beyond the G5 Force, noting successes in stopping terror operations, especially along borders.

Meanwhile, Koen Vervaeke, Managing Director for Africa, European External Action Service upheld that a “disturbing” confluence of events and forces throughout the Sahel requires a more “ambitious and demanding” approach to regional problems, including more inclusive and responsive governance.

He reaffirmed financial and other support for both MINUSMA and the G5 Force, and pushed for regional government reform, including through higher levels of civilian leadership and the full restoration of State authority.

Speaking in his capacity as Chair of the Peacebuilding Commission, Canadian Ambassador Robert Keith Rae, said that the Commission’s efforts to tackle development and security challenges, in part through greater empowerment of women and youth, also addresses diverse “cross border risks” and called for greater access to credit, including by women entrepreneurs.

In implementing the regional goal of ensuring that conflict does not spread further – putting future development efforts at risk – Mr. Rae underscored that successful peacebuilding requires the respect of human rights and investigations of rights abuses, including those related to sexual and gender-based violence. 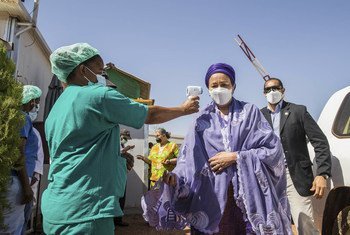 The UN Deputy Secretary-General, Amina Mohammed on Friday has been strongly advocating for the greater participation of women and youth in Mali’s ongoing transition towards a durable peace, and the response to the COVID-19 pandemic, as she continues her solidarity visit to West Africa and the Sahel. 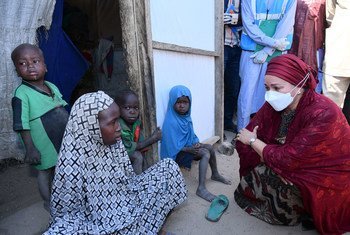 The United Nations Deputy Secretary-General is on a trip to West Africa and the Sahel region, and on Tuesday, she travelled to Borno state in northeastern Nigeria, a region badly affected by conflict and where many continue to live under the threat of Boko Haram insurgency.