UN Photo/BZ
A technician vaccinates a small child, February 1964, in Togo, where the Government carried out an extensive anti-yaws campaign, assisted by experts from the World Health Organization. UNICEF supplied the equipment.
12 November 2020
Health

"We now have the consensus and the commitment of every country to work in an integrated, cross-cutting manner in tackling all the neglected tropical diseases", said Dr Ren Minghui, WHO Assistant Director-General for Universal Health Coverage, Communicable and Noncommunicable Diseases.

It replaces the first blueprint published in 2012, whose targets will not be achieved, despite significant progress, WHO explained.

In addition to a focus on improved coordination and collaboration among health partners in the next decade in all countries, another distinct feature is a drive for greater ownership by governments and communities.

The 2030 targets include a 90 per cent reduction in the number of people requiring treatment for neglected tropical diseases and a call to eradicate dracunculiasis – also known as Guinea-worm disease - and the chronic skin disease yaws, that affects mainly children below 15 years of age.

“The new road map addresses critical gaps across multiple diseases, integrates and mainstreams approaches within national health systems and coordinates action across sectors," said Dr Mwelecele Ntuli Malecela, Director, WHO Department of Control of Neglected Tropical Diseases. "It also provides us with opportunities to evaluate, assess and adjust programmatic actions as needed over the next decade."

The emphasis of the new approach is on sustainability and follows a decades-old discussion about the relative merits of so-called “vertically” funded programmes that target specific illnesses, compared with the longer-term “horizontal” approach that involves comprehensive primary health care services offering greater overall protection.

"To do so effectively…countries must change their operating models and culture to facilitate greater ownership of (disease eradication) programmes”, Dr Minghui added, in a call for “smarter investments and high-level political commitment” to reduce the social and economic consequences of neglected tropical diseases.

While most neglected tropical disease-control programmes rely on medicines to treat sufferers, WHO has also warned that emerging drug resistance threatens decades of advances.

It remains crucial to monitor drug efficacy closely and develop “an appropriate arsenal of second-line drugs” to ensure that populations continue to be protected against neglected tropical diseases, it said.

In a related development, COVID-19 had played its part in making communities more vulnerable, the UN agency noted, as some people have taken antibiotics in the mistaken belief that they would protect them from the virus.

While some countries have seen their antibiotic use dramatically decline during pandemic lockdowns, physical distancing and improved hand and respiratory hygiene, “in other situations, antibiotic use has risen alarmingly”, WHO said.

These challenges are on the agenda at the annual World Antimicrobial Awareness Week (WAAW) from 18-24 November.

Its aims are to increase awareness and understanding of global antimicrobial resistance and encourage best practices among members of the public, health workers and policy-makers, to avoid the further emergence and spread of drug-resistant infections.

Member States recommended the adoption of two resolutions on meningitis control and epilepsy at the World Health Assembly on Thursday.

Committee A, which focuses on programme and budget matters, decided to recommend the adoption of the first-ever resolution on meningitis, which would approve a global roadmap to defeat meningitis by 2030 – a disease that kills 300,000 people annually and leaves one in five of those affected with devastating long-term consequences. 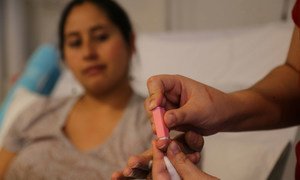 The COVID-19 health crisis has caused massive disruption worldwide in diagnosing and treating people with deadly but preventable diseases, including more than one in two cancer patients, UN health experts said on Friday. 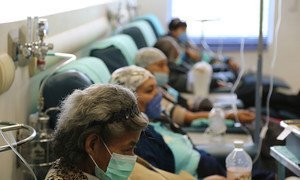 The fight against COVID-19 has severely disrupted services to prevent and treat cancer, diabetes, hypertension and other non-communicable diseases (NCDs) which kill more than 40 million people each year, according to a new survey published on Monday by the World Health Organization (WHO).